The site at 271 Spring Street was home to a secret drinking den in the 1920s.

Building on historical sites can be a difficult task at the best of times, but for the engineers working on 271 Spring Street, it was a case of tackling the near impossible.

Melbourne’s Lonsdale precinct is home to some of the city’s oldest buildings, many with their own wonderfully colourful backgrounds. This includes what is now 271 Spring Street, but was once home to a women’s shelter and also contained a secret drinking den in the 1920s.

Fast forward a century and the location now boasts a 16-storey commercial building above the 19th-century facade. The development recently won an Australian Engineering Excellence Award.

It wasn’t an easy ride, but developers ISPT saw potential in the site, which had sat untouched for almost two decades. With design partners John Wardle Architects, ISPT approached sustainable engineering group Arup to turn the site into a financially viable building project while preserving the historical significance of the location.

But the challenge wasn’t only in preserving the heritage — directly beneath 271 Spring Street are the double-stacked City Loop rail tunnels, while above is an electrical substation.

“We had all these constraints. How do you bring the building to ground when you’ve got these easements, heritage constraints, these tunnels? So when we were playing with these ideas we really had to think from the ground up.”

271 Spring Street was originally two buildings: the Church of England Mission Hall, built between 1894 and 1913, and the Elms Hotel, built in 1924. Both buildings are heritage listed, so any development on the site had to take care to protect the current facades.

“There was a requirement for an archeological dig on the site,” Salter said.

“We knew the Mission building supported women and children, but we also knew there were supposedly drinking dens and brothels in the structures at the back around the turn of the 20th century.

“A team went in and uncovered all these wine and champagne bottles, old coins, all that sort of thing. Seeing that really reminded us just how important the site is historically.”

Due to that significance, the 271 Spring Street project had to undergo heritage and community consultation, Salter said, with the heritage input in particular informing the final design of the structure and facade.

The project team engaged structural and geotechnical engineers in the early phase to figure out how they could build on the site.

“We went down there and did geotechnical testing to understand the ground conditions,” Salter said.

“We had all the data on the City Loop tunnels and the easements, so we started analysing the ground structure interaction.

“When you’ve got a building, you’ve obviously got a dead weight, but when it’s undergoing dynamic lateral and rotational forces in the case of an earthquake or extreme wind loading, where do all those loads go? How do they find their way into the ground and what impacts do they have on the tunnels?”

“It was an exciting challenge as a structural engineer. We had all these constraints and really had to think from the ground up.”
Richard Salter MIEAust CPEng

The engineers developed ground plane maps that outlined where building could occur, which areas had limited capacity and which areas were no-go zones. This helped create a foundation that redirects load to areas with the capacity to hold it.

“We went through a long list of different forms and materiality options for the superstructure, different options for the foundations, and settled on a steel composite structure which was very lightweight,” Salter said.

“In a traditional building, you typically have the stability core as centrally as possible in order to localise and withstand the applied loads. Instead, we needed to distribute those loads between a small core and very deliberately located bracing around the perimeter of the building; all of which needed to come to ground in certain discrete locations where we could put higher loads.”

Bringing it into the 21st century

A key component of any new development was the need to ensure the existing buildings would meet the latest safety standards. The Mission building needed its floor replacing, in addition to various discrete intrusions to ensure alignment with current earthquake regulations. 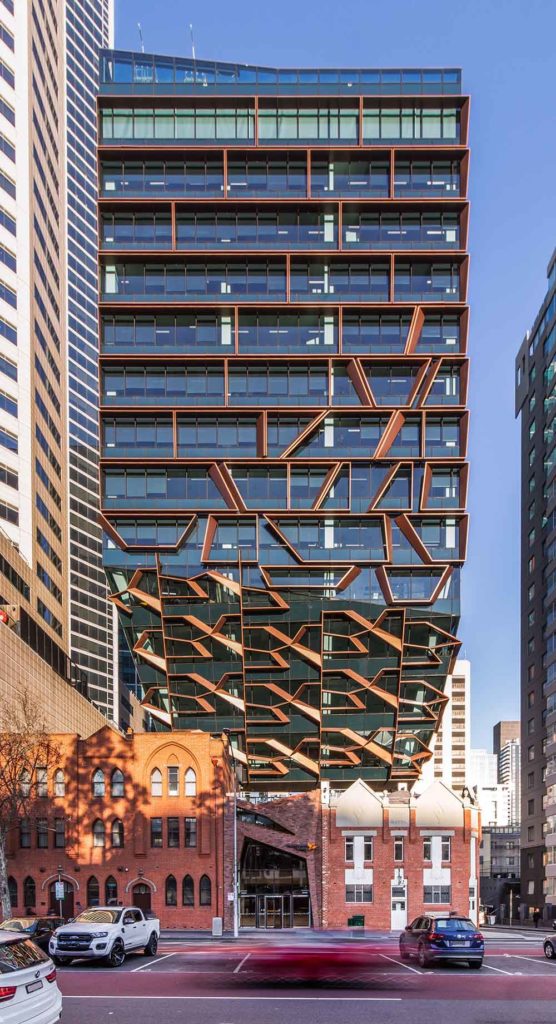 As the developer ISPT also sought to create a sustainable end product, Salter said the team engaged engineers from multiple disciplines to ensure the sustainability of the building, which ultimately comfortably achieved a Five Star Green Star rating.

“We had really aggressive sustainability targets, so we had to be really smart about the performance of the facade,” Salter said.

“The western part of the facade gets a lot of sun, for example, so we needed to ensure the shading and glazing specification responded to that.

“There’s a whole lot of fascinating angular facades around the building — some of that is architectural, but a lot of it’s also about performance and how you reflect off the sun’s heat. And that enables a more efficient building services system, because you’re not having to fight against that heat, which [would] to jack up your air conditioning.”

Salter said the Arup team members were proud of the end result and their ability to bring new life to such an historic site.

“We worked on this project for almost 10 years, from inception through to completion,” he said.

“It was such a complex and interesting project and we were really excited to be involved.”

BIM can be a game changer for construction industries

Edie-Louise Diemar is a journalist who has spent most of her career writing for associations big and small. She spends her time out of work desperately trying to get her cat to love her and playing that super trendy game, Dungeons and Dragons.