This “inexpensive and ubiquitous” material could protect buildings from earthquake damage

Geotextiles are a ubiquitous material in the built environment, but UTS’s Behzad Fatahi thinks they could be used to safeguard against earthquake damage.

In the 20th century, deaths due to earthquakes averaged 17,000 a year. Since the beginning of the 21st century, Dr Behzad Fatahi points out, average annual deaths have more than doubled. It appears that despite technological advancements and more stringent building codes, a lot more needs to be done to respond to rapid urbanisation and the creation of densely populated cities.

Fatahi, Associate Professor of Civil and Geotechnical Engineering at the University of Technology Sydney (UTS), believes geotextiles could be one answer to the problem.

These polypropylene and polyester sheets are inexpensive and ubiquitous, and countless construction projects use them to increase a foundation’s load-bearing capacity or stabilise the earth. Their thinness, flexibility and strength might also hold promise in saving properties — and lives — in the event of serious earthquakes.

Although it might seem that strengthening a building’s foundations might offer more seismic protection, Fatahi said “this makes the whole system stiffer and therefore, unpleasantly, the earthquake’s effect is more severe. We proposed that actually we need to make the foundation a bit more flexible.”

Fatahi’s work on the subject with Ruoshi Xu was published this year in two civil engineering journals.

“When you make the foundation more flexible, then what happens is that the base of the structure can rotate more,” he said.

“It’s flexible, therefore it can dissipate the energy of earthquakes. But it is strong due to the addition of geotextiles, so the structure or the foundation won’t collapse while rocking.”

Arranged in layers in soil in a composite system, geotextiles help disperse the energy from seismic events. The research suggests the optimal arrangement will be different across each application, with tailoring taking into account factors that include the number of layers, the spacing between layers, length and stiffness. A sample mid-rise building in the research required seven layers, 500 mm apart, with an axial stiffness of 10,000 kN per metre.

Xu and Fatahi’s other paper, which describes how the synthetics’ flexibility can dissipate seismic energy, suggests: “less shear forces will develop in the superstructure and piles, and the permanent rotation and settlement of the superstructure due to the interposed layer will be controlled … [T]he geosynthetic-reinforced cushion layer acts as a flexible raft to adjust the dynamic structural characteristics and the load transfer mechanism, while the piles act like settlement reducers.”

Little work had been done previously to put geosynthetics to such use. Asked about the novelty of the proposal, Fatahi said structural engineering approaches — focusing on steel and concrete to make things stronger, for example — tended to dominate. 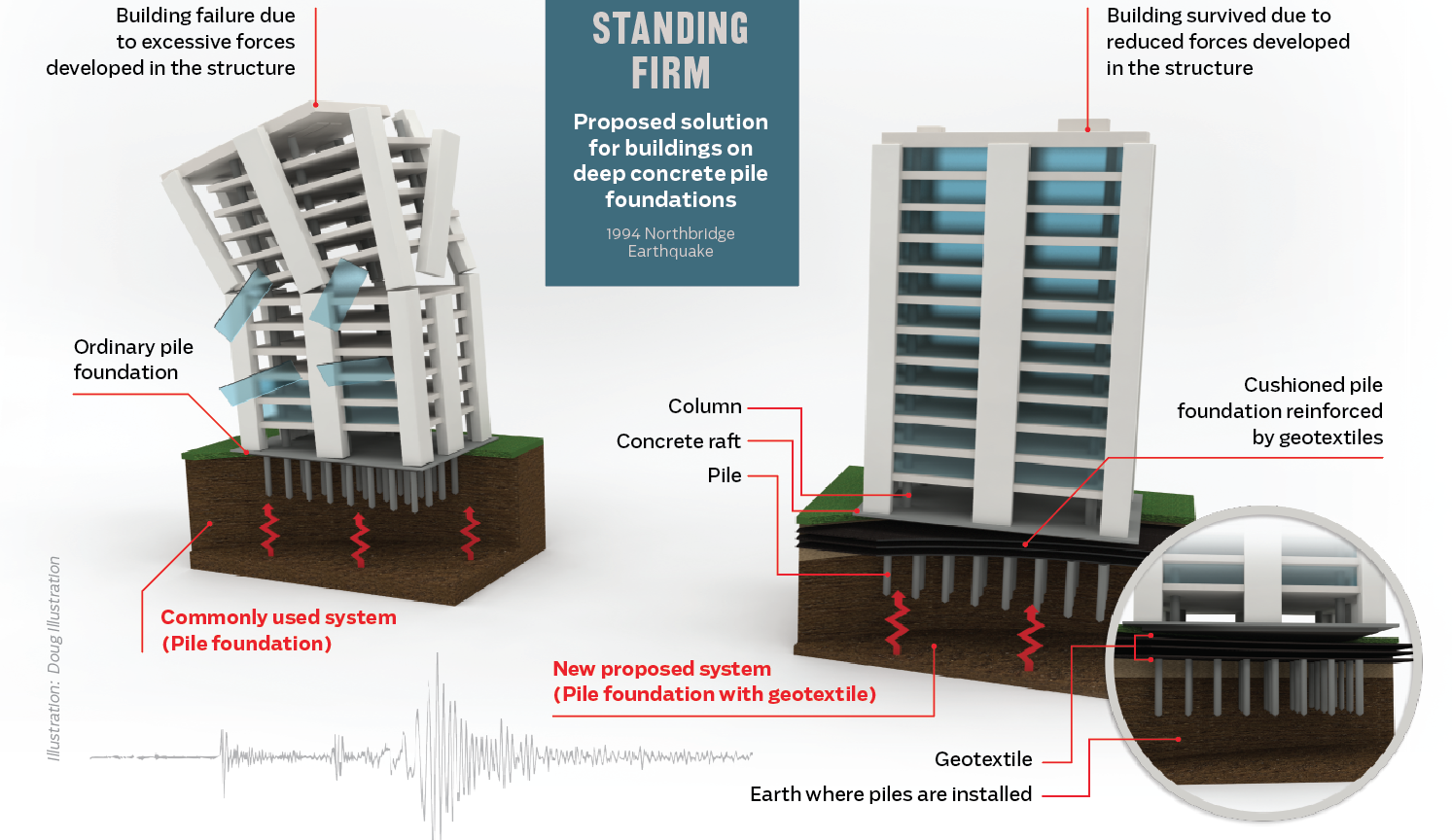 “If you want to really have a comprehensive solution for the protection of buildings against earthquakes, all these teams really need to work together,” he explained.

“You need to find teams that have expertise in interaction of these areas, and that is generally difficult. So that has been some of the issues in the past — why we haven’t been able to find the solution.”

Fatahi is a Chartered Professional Engineer (Civil and Structural Colleges) and earned his doctorate in Civil and Geotechnical Engineering from the University of Wollongong. He spent four years as a geotechnical engineer at Coffey Geotechnics in Sydney following university and has been at UTS since 2008.

He has been working extensively on the seismic protection of buildings since 2010. One motivation was the 2010 Port-au-Prince earthquake in Haiti, during which more than 160,000 people died.

Fatahi’s expertise on seismic activity is regularly sought by international news organisations, as it was after the Mexican earthquakes last year, for example.

On average, 36,000 people have died due to earthquakes each year since 2000, and engineering has a major role in shrinking this number, he believes.

“We discuss improved standards and all these technologies, but then I realised that something is not quite working, or basically we have got a big issue that needs to be solved,” he said.

At the Centre for Built Infrastructure Research, where Fatahi is a core member, the work on geotextiles is moving on to shaking table tests, which involve a scaled-down model of a high-rise building.

“By the end of this year or early next year, I hope that we can get some results out, but this is a big job, so it needs a few PhD students working on this concept,” he said.

For the adoption of geosynthetic systems outside of the laboratory, Fatahi believes the biggest obstacle is in having to think beyond purely structural answers to safeguarding against earthquakes.

This article originally appeared as “Steady ground” in the October 2018 issue of create magazine.