In suburban Perth, a team of engineers is setting Australian-first standards for environmentally friendly projects.

For the dog walkers, parents with young children and aspiring sportsmen who frequent Mills Park the newly-minted community development sparks a sense of delight and enjoyment.

For the engineers and urban planners who designed and created the environmentally friendly space the community’s reaction is the proverbial cherry on top for a project that ticks all the boxes.

Nestled within Perth’s bustling southern suburbs, Mills Park is a 24 ha recreational space that has spent the past few years undergoing a $47 million transformation from tired sports oval to cutting-edge community facility with sporting grounds, play equipment, wetlands and a two-storey community centre.

The development was commissioned by the City of Gosnells with a specific focus on sustainability, and on completion was awarded six stars in both design and construction by the Green Building Council of Australia’s Green Star rating system for public buildings.

The city’s Director of Infrastructure Dave Harris said the six star award was particularly pleasing as the city had originally set out to achieve a five star rating for the project.

Mills Park’s accolades continue to grow after winning the Institute of Public Works Engineering Australasia’s Medal for Project of the Year and the Excellence in Environment and Sustainability category in mid-2017.

The project is credited with multiple environmentally-friendly features including the community centre’s first floor concrete slab which incorporates a feature known as Bubbledeck – multiple soccerball-sized plastic bubbles filled with air that are held in place by the slab’s metal reinforcements.

“In concrete slabs you need a small section of concrete at the top and the reinforcement at the bottom, but the concrete in the middle is unnecessary,” Yngstrom said. 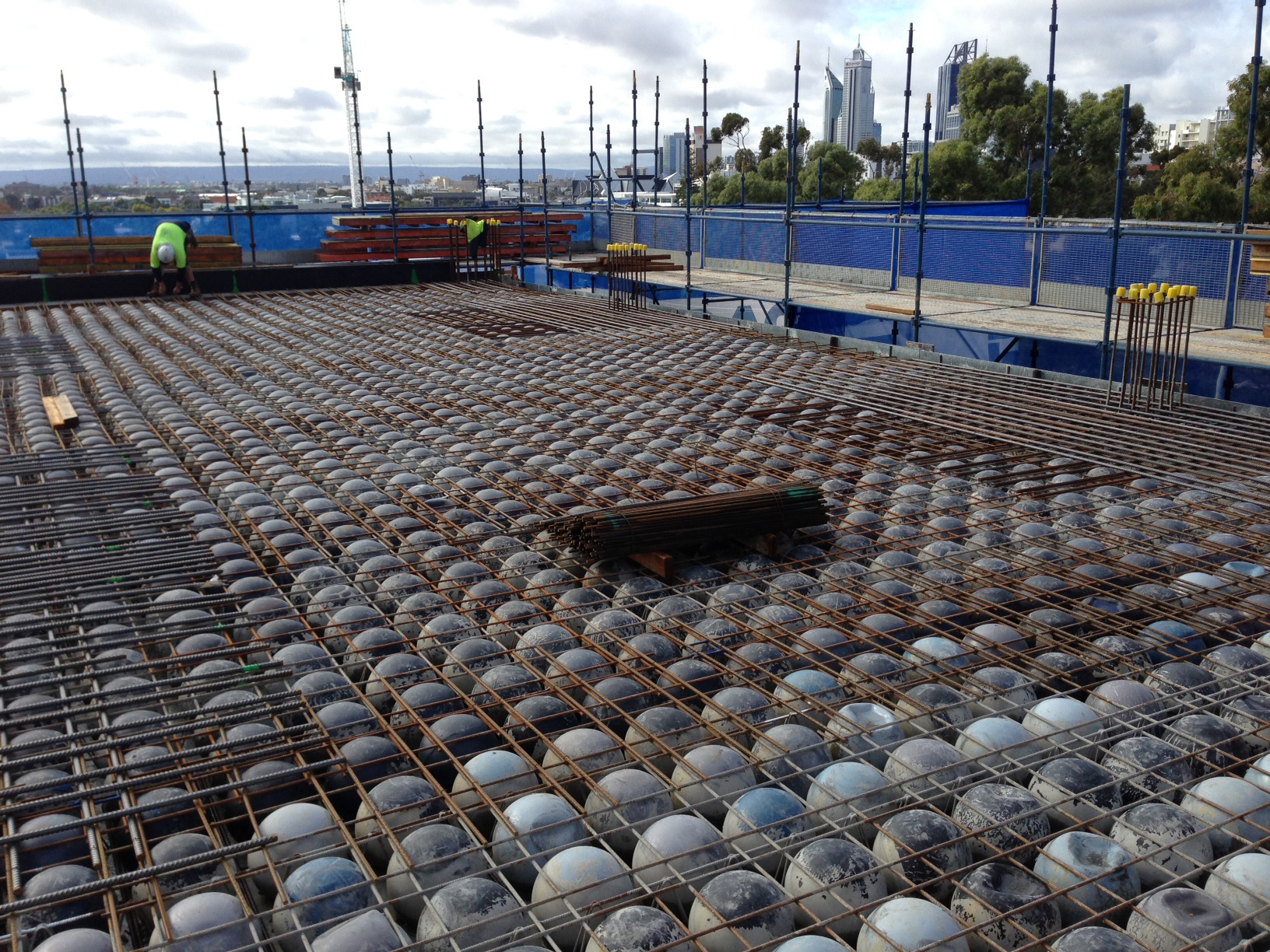 This approach requires less structural support and building materials overall, thus contributing to the green star aspects of the project.

“Furthermore, by incorporating the bubbles in the slab you get the same thickness everywhere and if we need more sheer strength in certain areas, such as for installing columns, we can just remove bubbles,” Yngstrom said.

He says at Mills Park they installed 346 bubble-filled panels covering an area of 2500 m². The bubbles replaced roughly 100-150 mm of concrete from each slab and saved about 250 m³ of concrete across the entire project.

The technology is being used in multiple projects throughout Perth and is incorporated into Melbourne’s new Parliament House annex. The company hopes also to utilise the product soon in Sydney.

Another key aspect of the project’s environmentally friendly footprint is the carbon reduction considerations incorporated into the concrete used in the building.

“In conjunction with the Environmentally Sustainable Design (ESD) consultants on the project, we specified a concrete mix that would achieve a reduction in carbon emissions as required to achieve the green star certification,” he said.

“Blast furnace slag is a replacement for conventional Portland cement and by reducing the volume of Portland cement in the concrete we actually reduce the carbon footprint of the building.

“The manufacturing process of conventional Portland cement is quite an energy intensive process.

Ruescher said from a structural engineering perspective the foundations and the geology of the site were very difficult.

“We discovered an old riverbed running through the site during construction, which uncovered soft spots within the foundation material, so the building foundations had to be redesigned around the spots to minimise differential settlement of the building,” Ruescher said.

“Another engineering challenge was the large, open spaces on the first floor to accommodate the club and function rooms.”

We utilised large-span steel trusses and transfer trusses to accommodate the architectural intent of the space, he said.

“For the steelwork we adopted a high strength steel grade. This is another aspect of the structure that contributed to the green star initiatives as you are getting a higher efficiency from a smaller volume of material.”

“Mills Park is very low-lying and it is very flat and full of clay soils, so it is all the things that drainage engineers hate,” Ertech Project Manager Trevor Mackell said.

“We had to develop an entirely new soil profile that was free-draining, however the site also had a lot of turf for sports grounds so we needed to make the soil retain a small amount of moisture at the same time,” he said.

The team developed a beach sand-like material that was very coarse with minimal clay or silt content that also retained its shape so maintenance machines could operate effectively to meet the tight tolerance requirements.

The team also added the soil conditioner Quicken to the top layer of soil, which would help retain moisture initially while the deeper soil would ensure the water drained quickly.

Mackell said they retrofitted a lot of the park’s swale drains and other low-lying areas with this subsoil drainage system.

The company also contributed to the project’s green initiatives by successfully recycling 91 per cent of all construction and demolition waste in excess of the 85 per cent requirement set for the project.

The contractor reused all existing basecourse materials from the former carparks as subbase material for the new footpaths and roads.

Ertech’s work on Mills Park was recognised by a Civil Contractors Federation National Earth Award in 2016 for excellence in planning and project management.

Cardno’s design of a large earth bridge over the other brook allowed the contractor to use pre-cast concrete planks, which limited environmental contaminants from leaking to the waterway below. Cardno subsequently topped the bridge with a cast in situ concrete deck and turf so football players could run straight from the change rooms in the community centre to the adjoining field.

Mills Park received a six-star green star rating after being assessed against components and materials that fall under nine separate categories. Here’s how it stacks up.

STEM and infrastructure two standouts in the 2018 budget