Urban areas around the world are taking a new approach to keeping cool, and the outcome portends well for the planet as well as the populace.

If the concrete jungle is sweltering, that’s due to more than the bright lights and fast times of big city life. Since the 19th century, experts have known that urban areas are warmer than the surrounding countryside, even though the effect has not been widely seen as a significant one

But with the climate heating up across the globe and more and more people around the world moving to cities in search of work and opportunity, figuring out how to counteract the urban heat island effect, as the phenomenon is dubbed, is more important than ever.

And as unpleasant as it can be to sit through the increasingly sweaty days and boiling nights accompanying climate change, cooling the planet’s cities matters for more than the comfort of their inhabitants.

“We don’t only design the urban environment for the outdoor area to be comfortable — provide shading and green spaces and tree canopies just for the people,” electrical and electronic engineer Haris Moraitis CPEng, Associate Director at consultancy HKA, told create.

“It’s about how it impacts the nearby buildings.”

Moraitis, who is also Chair of the Health and Wellbeing Technical Expert Panel at the Green Building Council of Australia, said cooler buildings use less energy.

“Think of the example of a concrete city, with no reflective surfaces, an asphalt street, dark-material roofing,” he said.

The urban heat island effect can be significant. Temperatures in parts of Sydney during the 2015-2016 summer varied by as much as five degrees Celsius from official observations, while a peak variation of seven degrees Celsius has been recorded in Melbourne. The effect is particularly pronounced at night, when heat absorbed by dark concrete surfaces during the day radiates back into the atmosphere, preventing the city from cooling down.

That has a lot of flow-on effects.

“If you flip this and actually provide some reflective surfaces and green space, it means there’s no need to treat the building as a heat sink.”

It can also be dangerous. A heat wave in 1995 in Chicago resulted in more than 600 excess deaths over five days. In the summer of 2003, high temperatures caused 70,000 excess deaths in Europe. And, according to the National Climate Change Adaptation Research Facility at Griffith University, “extreme heat events, or heatwaves, have killed more Australians in the past 200 years than any other climate hazard”.

Research the facility produced with Monash University found that “a number of studies have shown a greater impact of extreme heat on mortality in urban areas than surrounding regions”.

Cool for the suburbs

That’s why there’s more to the City of Sydney’s new Cool Suburbs program than providing relief from hot summer days.

Cool Suburbs is part of the city’s Resilience Strategy, created as part of its participation in the international 100 Resilient Cities program. An initiative of the Rockefeller Foundation, 100 Resilient Cities looks to push thinking about urban environments beyond considerations of sustainability and into a more comprehensive understanding of the need to build cities that can withstand all kinds of challenges and disruptions.

“You can take your 50 or 100-year risk scenarios and say, does this or doesn’t this meet those standards. That’s an engineering question.”

Beck Dawson, Sydney’s Chief Resilience Officer, said resilience is about “the capacity of the city to cope with shocks and stresses”.

“When we say the city, we mean the people, the institutions, the organisations, the structures and fabric of the city as well,” she told create.

Included among the resilience challenges facing Sydney are social cohesion, community preparedness, and adaptation to climate. The last of these is where Cool Suburbs comes into play.

“Sydney’s weather is changing; the climate is getting hotter and storms are becoming wilder and more frequent,” the city’s Resilience Strategy stated, mentioning rising sea levels, heatwaves, droughts and bushfires could follow.

“To address the challenge of pressure on our health, the environment, and economy, Sydney will make changes to sustain our quality of life and our environment.”

Dawson said the participation of engineers is particularly important to the success of the strategy.

“We desperately need their interest and support in understanding these community-scale risks in the way they think about delivering local and city-wide infrastructure,” she said.

“We need them to help understand and work through how some of these risks can be better managed and better costed.”

The Cool Suburbs strategy will grade new and existing neighbourhoods in the region according to where the temperature is lower and which parts of the city are more comfortable, productive and safer for the people who live there. This will create for each suburb a “Cool Score”, which draws on data sensing, materials science, built environment planning and performance monitoring.

“We are doing the initial modelling now. The idea is that that work continues in the next few months and we do potentially a little bit of ground-truthing of the data over summer,” Dawson said.

“We’re in project development right now, so the technical detail of all of those things is being worked out at the moment with a range of partners.”

Ideally, Dawson said, the Cool Score system would link urban attributes to levels of cooling, so the theoretical model could be applied to new neighbourhood designs, as well as being used on existing suburbs.

“I think this calculator is going to push the enthusiasm,” Moraitis said.

He believes that although planners and engineers understand why cooler cities are important, developers and contractors don’t always think on a large enough scale — at the level of neighbourhoods rather than of individual buildings — to integrate this understanding.

Even if a designer specifies the use of materials with a high solar reflectivity index, he says, contractors are tempted to dilute the impact in construction. “It’s cheaper to get an asphalt or a dark concrete than a white concrete, so it means the cheaper option is always preferred,” he said.

Cool Suburbs aims to promote materials that reflect heat rather than absorb it. “The other technology is the numerous projects in the industry at the moment like paving and roofing materials that promote cooling,” Moraitis said, pointing to cross-laminated timber buildings as an example.

“That not only reduces carbon emissions but actually provides a good method of absorbing heat and radiating heat.” 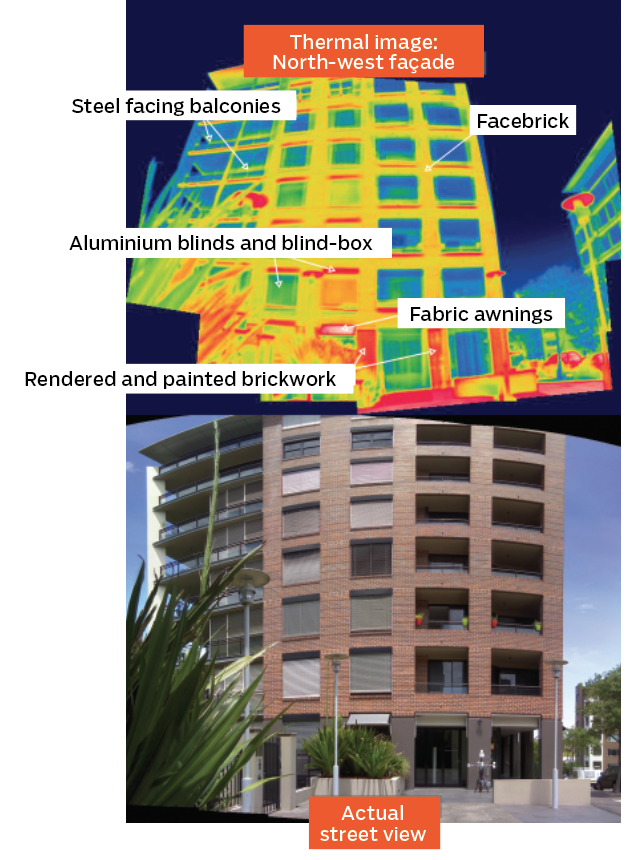 The result is a building that absorbs and dispels heat in a way more attuned to the environment in which it stands.

“Like a tree, for example. Imagine a tree on a hot summer day,” Moraitis said.

Actual plants can help as well. Plant shade and green spaces are other approaches that Moraitis mentions, as well as parks within mixed-use developments, green walls, and green rooftops that promote cooling.

According to the City of Sydney’s Resilience Strategy, “Every 10 per cent increase in tree canopy can reduce land surface temperatures by 1.13 degrees C.”

For its part, Melbourne has produced its own resilience strategy, which said “although parts of Melbourne have extensive green spaces, some Melbourne municipalities have among the lowest rates of tree canopy cover in Australia”.

The city is pursuing a “metropolitan urban forest strategy” in response, with “a range of urban greening and revegetation projects”. The outcome will be cities less like concrete jungles and more like actual jungles. That’s better for people and for the planet.

“It’s about providing comfortable environments for the occupants of the city, and at the same time protecting the climate,” Moraitis said.

This article originally appeared as “Hot in the city” in the December 2018 issue of create magazine.