Investment in hydrogen could make it a major clean energy export

Hydrogen is a potential successor to LNG as a high-value Australian energy export to Japan, which is looking for alternatives to nuclear power in the wake of the Fukushima disaster, according to energy and resources strategic analyst Steven Spencer.

“The devil is in the detail of how you produce the hydrogen to export to Japan – whether they are emissions intensive or clean technologies,” Spencer told create.

Among the proposals on the table are the recent announcement of a solar-to-hydrogen plant in central Queensland in partnership with the Japanese Sumitomo Corporation, and a joint Kawasaki Heavy Industries-AGL project to convert brown coal from the Loy Yang A coal mine in Victoria to hydrogen gas.

Both of these projects have an export component and have been developed in consultation with Japanese government and industry.

Proposed methods of producing hydrogen vary in terms of technology maturity and carbon emissions, explained Spencer, who is also a member of the Electric Energy Society of Australia, an Engineers Australia technical society.

The $500 million Loy Yang pilot has been described as a world-first pilot to gasify brown coal into a mixture of gases composed mainly of hydrogen and carbon dioxide. After extracting the carbon, the hydrogen would be liquified and shipped to Japan from the Port of Hastings.

The carbon waste from the Loy Yang project could potentially be injected into depleted gas fields in the Gippsland Basin. However, Spencer said the feasibility and safety of this methodology has not yet been proven at scale.

“You would have to have a means of capturing carbon dioxide and storing it in [depleted] oil or gas wells for 1000 years or more – there is no firm evidence that this can be done,” he said.

Spencer also queried whether the expense of the project was justified by its output, estimated at 3 tonnes of hydrogen gas over the pilot year.

“It’s no solution to pollution problems at all; it just shifts emissions [from Japan] to Australia,” he said.

Kawasaki Heavy industries is also working with Norwegian company Nel Hydrogen on a project to produce liquified ‘green’ hydrogen gas for export to Japan using renewable sources such as hydro and wind power.

While there are emerging technologies to convert methane into hydrogen with synthetic graphite as the by-product – including the Australian developed Hazer Process – these are still very much in the development stage, Spencer added.

One well-established method of producing hydrogen is to use electricity to electrolyse water, splitting it into hydrogen and oxygen. If the electricity is sourced from renewables, this method produces no carbon at all.

While the energy efficiency of current electrolysis methods are typically 60 to 70 per cent, which could be improved, Spencer said the loss of energy from renewable sources wasn’t an important consideration.

There is also potential for excess power from variable renewable sources (such as wind and solar panels) attached to the electricity grid to be stored as hydrogen gas in a process known as ‘power-to-gas’.

“[It is] simply converting that energy into stored chemical energy, just like another form of battery,” Spencer explained. He added that hydrogen has the potential to be stored indefinitely, without the energy leakage experienced by batteries. 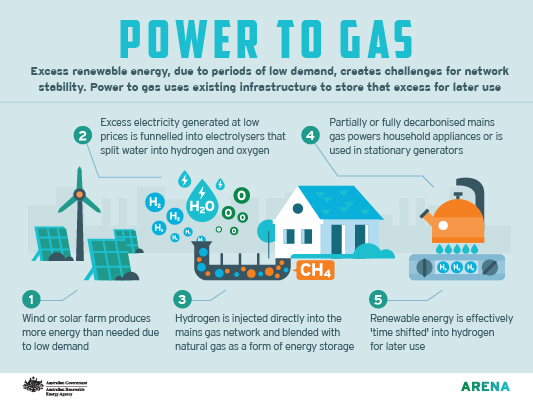 Spencer said power-to-gas was a sound proposal, but the technical constraint is that only about 10 per cent by volume of the natural network’s capacity could be hydrogen (although levels of 30 per cent or higher could be feasible), and the possibility of leaks would need to be addressed.

As well as a clean fuel source for vehicles such as cars, Spencer said hydrogen has the potential to be used in remote mining operations as a replacement for diesel.

Spencer predicted that hydrogen-fuelled major industrial applications will be established around the world in the next decade, and an Australian hydrogen export industry could find a foothold in the next 10 to 15 years.

Merryn York is regulating the future of Australia’s electricity market