Engineers have been relying on the same set of Australian Rainfall and Runoff Guidelines since the 80s. It’s time for an update.

The year is 1987. In Sydney, an engineer named Mel Ward is making the nation’s first mobile telephone call. In Canberra, Prime Minister Bob Hawke appoints Justice Mary Gaudron to the High Court, the first woman to sit on the bench. In the world of entertainment, popular Neighbours actress Kylie Minogue is readying her first single.

And in civil engineering, Engineers Australia issues the Australian Rainfall and Runoff (ARR) guidelines to provide Australian designers and analysts with the best available information on flood estimation.

Save for a minor update in the 1990s, engineers since have been relying on this same set of ARR guidelines. But just like the rest of the world, engineering has changed a lot since the days of permed hair and shoulder pads.

“We didn’t all have a computer on our desk, so a lot of techniques were hand-calculation techniques. Now everything’s computerised,” said Mark Babister, the Managing Director of engineering consultancy WMAwater.

And that means the past 30 years have brought new and better ways to approach flood management.

“There’s a much larger rain gauge network, particularly on rain that falls on what we call a pluviograph, which measures rain with time, instead of measuring it just once a day. We have a lot of larger data on streamflow and flood history.”

Three decades of progress have gone into Engineers Australia’s brand-new set of ARR guidelines, which were finalised in November 2016. As Chair of the ARR Technical Committee, Babister was a key force driving this update. 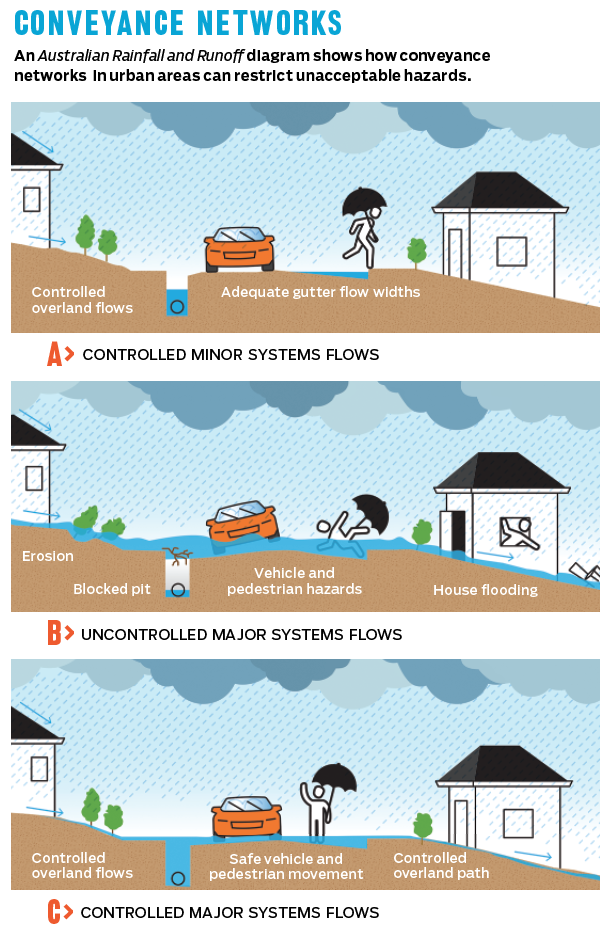 “Australian Rainfall and Runoff really looks at a big stream-end or the rear-end of floods, and how rainfall turns into floods,” Babister said.

“Because we’ve got a very variable country, with all different sorts of weather types — climate zones — we need a national guideline to assist people or practitioners in estimating flood behaviour, flood levels, sizing infrastructure, protecting communities, and planning for these inevitable disasters and the response, as well.”

The ARR guidelines were first laid down in 1958, and the 2016 version is the fourth full revision. Babister said a lot went into the overhaul.

“It’s not a project that could be delivered by one person, and probably not even delivered by a small team of people,” he said.

“The group that worked on that project is pretty large, from the small management group — the group of people that manage the overall project, that was nine of  us — and then there was a broader team of about 30 or 40, and then a bigger group on top of that who did a lot of checking and testing and minor parts of the project.”

And those people were working with a lot of data. The 1987 guidelines were based on 30 years of information from 7500 daily rainfall gauges.

This new version adds another 30 years of extra rainfall and streamflow data to that, including data from more than 2200 pluviographs and 8000 daily rainfall gauges. More than 900 streamflow gauges and 100,0000 storm events were analysed.

It’s little wonder that efforts like this are getting Babister plaudits from the leading lights of the industry. His lifetime’s work was recognised last year when the Civil College of Engineers Australia awarded him the Sir John Holland Award for the civil engineer of the year.

“It was a significant honour to win that award and it was quite humbling actually,” Babister said.

“During the last couple of years, I’ve worked as an expert advisor to the Commissioner on the Queensland flood inquiry and I also worked on the Natural Disaster Insurance Review, which is flood insurance, and several other major projects.”

The Sir John Holland Award is presented to an eminent civil engineer considered to have made a major contribution to the profession. Projects on which Babister has worked include an upgrade of the Pacific Highway, the Brisbane River Flood Study and the Warragamba Dam.

During the Queensland inquiry, he defended decisions made by engineers about how much dam water to release in advance of the floods.

One problem facing flood planners is that water often can’t be stopped; it can only be managed.

“We design for the consequences, when that thing that you’ve built is not big enough and the water goes over the top of a major roadway, or down a street, and you can’t manage that safely,” Babister said.

“You design for a certain capacity, and then, for when that’s exceeded — which it inevitably will be — you design for it to fail in a safe manner.”

That can mean channelling water flow so that the resulting runoff avoids critical agriculture and urban infrastructure.

“With towns we try to make sure that they have better flood-free access,” he said.

“You don’t have unacceptable impacts on the houses and the businesses and also what’s called community structure, which would be a hospital or an ambulance base or police station, childcare centres and schools and aged care facilities.”

It’s about minimising the harm the water causes.

“You can’t normally not have an impact, but you can often choose where that impact occurs,” he said.

From downpour to deluge

Among the many important considerations in the 2016 update of the ARR guidelines is its information on taking into account the influence of climate change.

“Human induced climate change has the potential to alter the prevalence and severity of rainfall extremes, storm surge and floods,” ARR warns.

“Recognition of the risks associated with climate change is required for better planning for new infrastructure and mitigating the potential damage to existing infrastructure.”

In Australia, parts of the country with histories of bad flooding could be in more danger in the future.

ARR focuses on potential changes in rainfall intensity but warns practitioners that climate science is constantly changing. A changing planet means that even preparations for change might need to change.

As climate change alters weather patterns across Australia and the rest of the world, such forethought will matter more than ever.

“The method described in the guidelines of flood estimation hasn’t really changed for climate change, but the inputs do.”

Those inputs could include unusually high levels of rainfall becoming more common, and the most intense storms becoming even more dangerous. Houses that are currently considered to be able to withstand a one-in-a-hundred-year storm might find that they are no longer so secure.

“That level of protection that people assume: climate change might turn it to one in 70 in 2050 or 2060 and 2100, depending on what the world does about greenhouse gases,” Babister said.

A lot can change in 30 years, and global warming has made that more true than ever. It is work like Babister’s that will help ensure a safer course for that future.

This article originally appeared as “Flood lines” in the December issue of create magazine.