Two Australian brothers saw an opportunity to transform waste into something useful, and their ambitions are global in scale.

When brothers Mike and Matthew Martella set out to rewrite Australia’s energy rule book in 2007, they had very few pages to work with.

How could two brothers — both of them qualified chemical engineers — shake up a market that was barely off the ground?

The answer would be found in Anergy, the global waste transformation company that the Martella brothers established in Bunbury, Western Australia, more than a decade ago.

After purchasing a 70 per cent stake in Ansac, their father’s thermal processing equipment business, Mike and Matthew developed a new model to help companies manage their industrial waste while securing and controlling their future energy supplies via distributed power generation.

Since 2013, Anergy has built, or is in the process of building, approximately 10 waste transformation plants around the world. It now employs more than 70 people in its global offices.

But, as both brothers attest, it hasn’t been easy.

“What we saw as a two or three-year journey has probably been more like 10 years, and it’s a bit tough,” said Mike, Anergy’s CEO.

“It’s difficult to launch new technology in a new space, and to prove a process to a level where it can be financed and accepted as a mainstream. We’ve got several projects that we’ve built, and several are in the works, and all of them are based around the same core energy processing technology. The real vision is now starting to come into focus.”

Turning up the heat

Pyrolysis can broadly be defined as the thermochemical decomposition of organic materials at elevated temperatures and without oxygen.

While traditional pyrolysis can reach temperatures of up to 550°C, Anergy’s HTP can pyrolyse at temperatures greater than 800°C.

Anergy’s technology is based on kiln technology that the Martellas’ father, Charlie, developed over more than two decades.

The higher temperature allows for a more thorough chemical breakdown of the materials, reducing tars and improving both yield and emissions. Except for nuclear, all types of wastes can be processed.

“We were looking for new opportunities for what we could do with the kilns that our father had been [producing] for the mining industry,” explained Matthew, Anergy’s COO.

“The truth is that neither of us really knew what we had our hands on at that stage. What we did know was that there was a gap in the marketplace and that companies are paying a lot of money to divert their waste from going into landfill.”

“There’s huge potential in Australia to be looking at material value through waste conversion,” he said.

“So much is going into landfill.”

Developed in collaboration with Toronto-based CHAR Technologies, the project was supported by the Canadian Government.

“Anergy’s project in Canada is an interesting example,” Florin said.

Anergy’s plants range in size from large fixed facilities down to packaged containerised plants. A recent project in Spain, for example, was built entirely within shipping containers.

“The idea is that it’s constructed completely in our factory and we ship it to site almost fully commissioned and then just plug it in to place,” Mike said.

“We also see great potential in creating a network of small power plants, which replace diesel generators and provide much lower cost electricity to some of the poorer people on Earth. That approach is something that nobody’s been able to do so far.”

The Martella brothers are problem-solvers at heart, which made engineering a natural career choice for them.

Matthew studied chemical engineering at the University of Adelaide and worked for Anaconda Nickel before joining his father, Charlie, at Ansac in 1999.

Mike graduated with the same qualification from Curtin University and worked for Alcoa as a process engineer before moving to London, where he worked for Bechtel.

“I got shipped out to India to work on the Jamnagar Oil Refinery expansion and got my taste of big-project engineering,” Mike said.

“It was as the end of that contract when my brother rang me up and said, ‘How about we look at doing this buyout [of Ansac]?’.

“If I look at my father, he’s a mechanical genius, and he’s an entrepreneur through and through, but we could see potential for something on a global scale.”

If this global vision were to be realised, a global network would have to be built.

This was one of the reasons Mike studied a Master of Business Administration (MBA) at the University of Oxford after Anergy was launched.

“I saw it as one way to connect to a lot of people, particularly in the UK,” Mike explains.

“Also, I’d been in business for a number of years and at some point, you have to slow down and check whether what you think you know is actually right. I walked away with confidence at the end of my MBA that I know what I’m doing.”

This global vision prompted the brothers to move the Anergy head office to Singapore in April 2018.

“We want to tap into markets where there’s a lot of growth, and that’s Southeast Asia,” Mike said.

“When we were starting out, there was hardly any discussion about renewable energy [in Australia] and there was no discussion about waste-to-energy. Europe was the only place where you could work in this space, so I moved back to the UK in 2009 to set up [an Anergy office].”

Over this time, the Martellas have seen Australia’s appetite for renewables increase rapidly. 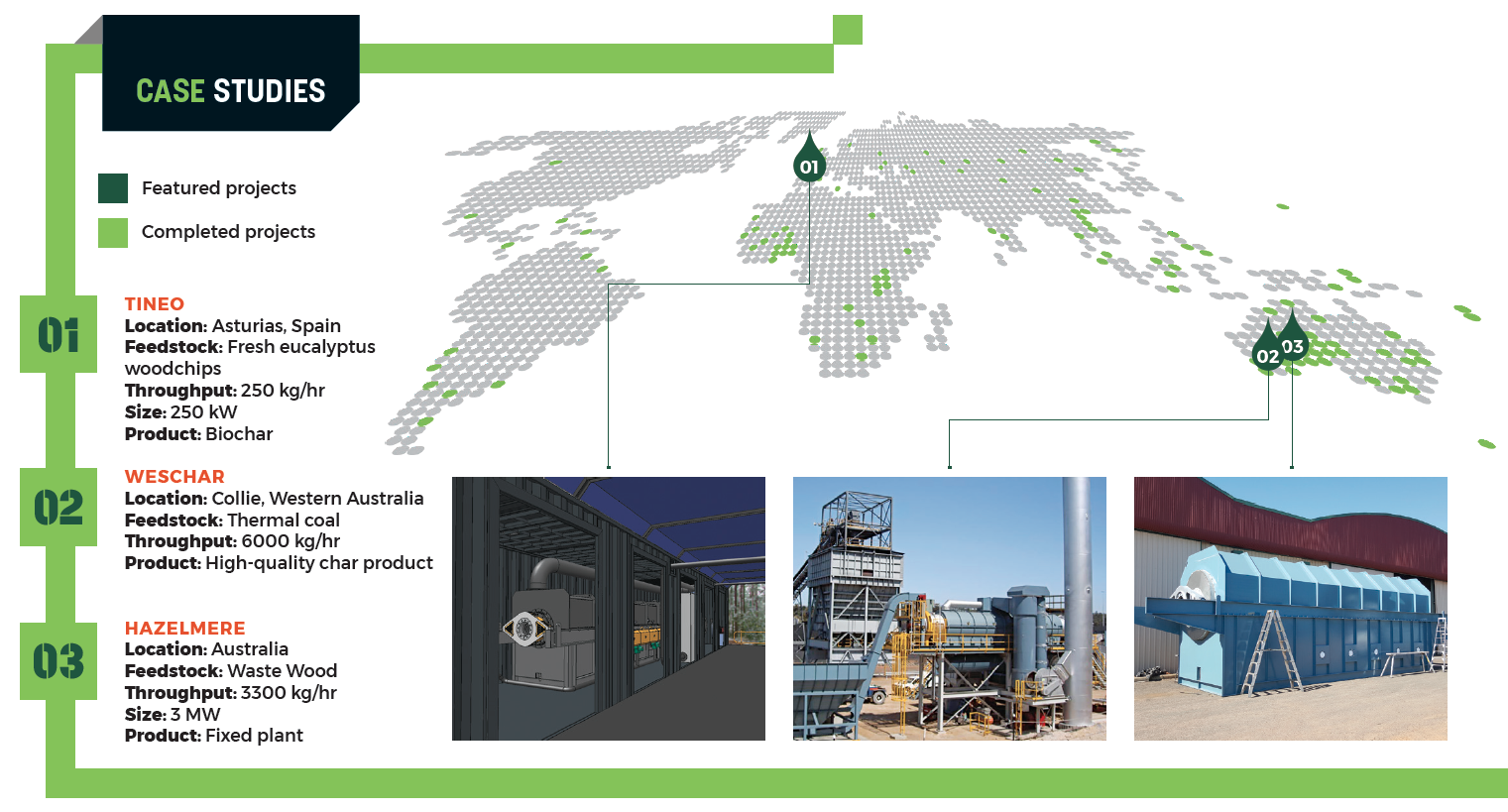 While Singapore is viewed as Anergy’s strategic springboard to markets such as China and India, Anergy’s flagship project to date is located in Hazelmere, 14 km east of Perth’s central business district.

A joint project between Anergy, the Eastern Metropolitan Regional Council (EMRC) and AusIndustry, the plant is installed on a site with an existing waste timber recycling facility.

It will produce three megawatts of electricity to provide renewable, base-load power to Perth Airport and is expected to be operational in 2019.

“It was an excellent project for us and it’s in our home state, which is great,” Mike said.

“On the negative side, as it is partially funded by the Federal Government, it ran into a lot of regulatory issues by the EPA [Environmental Protection Authority], which was related to the State Government, and the actual site is under local government.

“We found ourselves caught between these three layers. That’s not a very good place to be and it meant that there’s been more delays on the project than we had hoped.”

Bureaucracy is not the only challenge the Martellas have faced. In the case of their recent project in Canada, they were battling the elements.

Andrew White, CEO of CHAR Technologies and a chemical engineer, said he chose to partner with Anergy due to the company’s ability to achieve higher pyrolysis temperatures.

“We didn’t know of anyone who could match the technology,” White said.

“The challenge that we faced was that the plant is based in London, Ontario, where the temperatures reach minus 30 degrees Celsius,” White said.

“It just gets too cold for the equipment to be outdoors, so it needs to be housed inside a building, but that presents potential fire safety hazards. Anergy helped us to find a solution to the problem and Matthew flew over here to work on it with us.”

From the get-go, the Martella brothers have positioned their company as a waste transformation business rather than waste-to-energy.

“The reason is that we can do a lot more with the waste than just produce electricity,” Mike said.

Much of Anergy’s strategic decisions were developed over the Friday breakfast meetings the brothers would have each week in the early days of the company.

“There was no fixed time limit; if the meeting went through to lunchtime, so be it,” Matthew said.

“We were constantly flying new ideas up the flagpole.”

Funding was a focus of many of these early meetings. If they were to seek investors, what price would they put on their company?

“We made a decision a few years ago that we had enough in the traditional business [Ansac], so we’ve maintained our private shareholding,” Mike said.

“This may change down the track.”

What else do the Martella brothers have planned for Anergy? More projects in Australia may be on the cards. The company’s exposure in the local market recently received a boost when Mike and Matthew were shortlisted as 2018 Western Region EY Entrepreneur of the Year finalists.

“It’s a very long and expensive ride to get technology like ours to a commercial stage in the market and it takes a lot of effort,” Mike said.

“I don’t see any one else globally who is as technically capable and as far developed as we are.

“I think there’s a window of opportunity for us to do something quite spectacular in the next few years.

“I accept that other technologies and groups will catch up with us, but we’ve got a three-to-five-year head start to really build a brand. There’s a long way to go, but we’ve finished the uphill part on the rollercoaster and we’re just about to start the really fun bit.”

The Martella brothers believe engineers have a head start in the world of entrepreneurship.

“In engineering, you are taught to break down problems and solve them and that’s a skill you need as an entrepreneur,” Matthew said.

Mike added that an engineering degree helped him “connect the dots” in the business world.

“An engineering degree allows you to take stock of what resources you have, what opportunities you have, and then think structurally how you can connect them together,” he said.

“I don’t believe other types of degrees train you to think about the world in those ways.”

Their advice for budding entrepreneurs? For Mike, it’s about building a sold network of people while Matthew stresses the value of self-belief.

“Back yourself,” he said.

“And don’t do things the same way as everyone else, because that’s not entrepreneurial. Don’t follow the crowd.”

This article originally appeared as “Heat wave” in the May 2019 issue of create magazine.

5 ways technology will change the way we fight bushfires