An ambitious engineering project in Argentina hopes to clean up the 64 km Riachuelo, which exposes more than 4 million people to toxic pollutants.

Argentina’s Riachuelo is a notoriously toxic river that snakes around the southern edge of Buenos Aires, its inky green surface a stark reminder of the environmental hazards swirling within its depths.

Long a dumping ground for industrial waste and sewage, it ranks with the Ganges in India and the Pripyat, near Chernobyl in Ukraine, among the most polluted waterways in the world.

While official promises to clean up the river have come to little in recent decades, action is finally underway thanks to a Supreme Court ruling, a significant cash injection from the World Bank and some innovative engineering.

The 64-kilometre river and its surrounding area, known as the Matanza-Riachuelo Basin, is home to more than 4 million people who face serious health risks as a result of exposure to its pollutants.

Argentina’s Environmental and Natural Resources Foundation estimates that 35 per cent of these people do not have access to drinking water and 55 per cent lack sewers. Approximately 15,000 industries dispose of waste into the river, contaminating it with arsenic, cadmium, chromium, hydrocarbons, sulphides, zinc and lead.

A recent study by the Authority of Matanza-Riachuelo Basin (ACUMAR), the public body established to oversee the US$1.2-billion clean-up, revealed that 17 per cent of children in Villa 26, which lies on the river’s edge, showed an excessive level of lead in their blood.

Cleaning up the river

In 2008, Argentina’s Supreme Court approved the historic Mendoza ruling, which demanded that action be taken against the stream of pollutants flooding into the Riachuelo. The current sanitation scheme, which is the first part of a program for the sustainable development of the Matanza-Riachuelo Basin, consists of three foundational works.

The first, known as the Riachuelo Left Bank Collector, is a network of inland tunnels designed to intercept both industrial and civil discharged water and divert it towards a pre-treatment plant, which is the second key element of the scheme.

Once it reaches the plant, the liquid will undergo a ‘coarse’ separation process designed to retain only the largest solid particles from the incoming wastewater flow. This phase will be supplemented by the sedimentation process in the plant basin.

The third work in progress is a US$450-million hydraulic tunnel, which will serve as an outlet for the treated water. It is currently being excavated by a consortium led by the Italian civil engineering company Salini Impregilo and, at its expected completion in 2021, it will rank among the longest subfluvial tunnels in the world, spanning 12 kilometres and dug to a depth of 40 metres in the bed of the Rio de la Plata, where the waters of the Matanza-Riachuelo Basin empty. 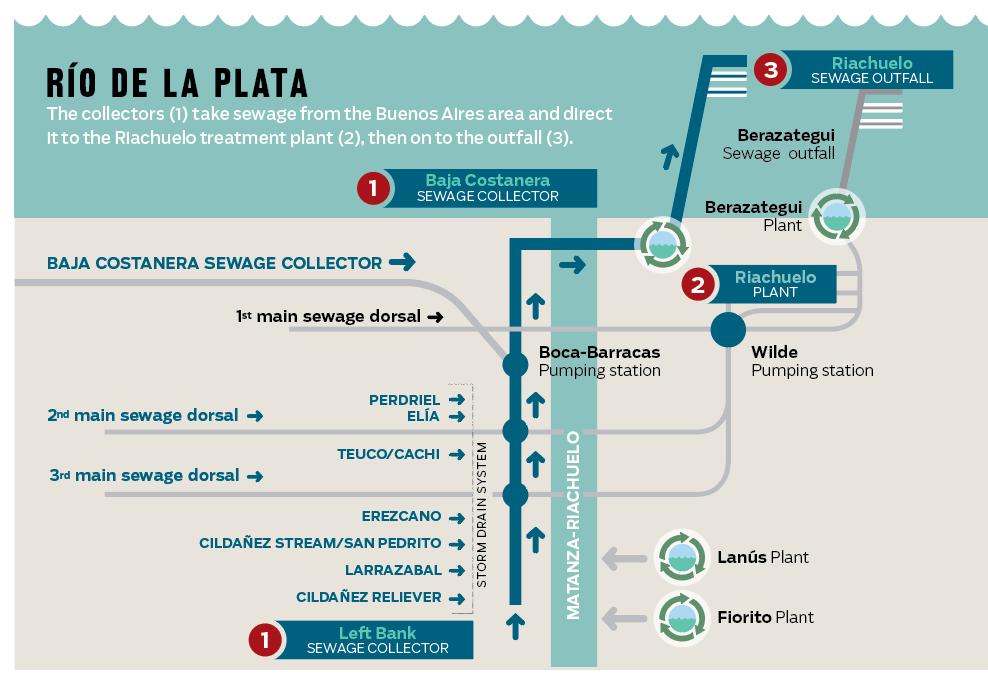 Mirko Martini, Chief Engineer with Salini Impregilo, said few tunnels have been excavated under conditions like those at the Riachuelo River.

“Everything is a challenge,” he said.

“You have to remember that we are under a river with a lot of pressure and we’re excavating through sub-ground.”

Martini’s team is excavating approximately 560 metres of soil per month, and the volume is determined by factors such as ground conditions and the fact that there is only one tunnel access point.

“If something goes wrong, we need to sort it out inside the tunnel itself,” he said.

“There is no chance to do it from the surface. The more you move into the tunnel, the more complicated it becomes to transport the soil out of the chamber for final disposal.”

The soil is being moved to a landfill area onsite, and, because it is being excavated with a biodegradable foaming agent, Martini says there is potential for recycling.

“In the old days, you always had serious environmental issues when you excavated material,” he said.

“All of a sudden nobody wanted to take it, because basically you had a product that was a chemical aggregate. However, in this case we are using a product that is 100 per cent biodegradable, which allows us to be certain, within a safe margin, that it is clean.”

The tunnel has an internal diameter of around four metres and is being dug using a double-shielded tunnel boring machine. As internal water pressure is higher than that of the exterior, it is lined with a complex joint and segment arrangement to provide adequate strength.

“Most tunnels using segmental lining are designed to work in compression,” explained Martini.

“When you’ve got tension, the design is quite peculiar, and we spent quite a lot of time designing the connection between segments and rings. It was a key part of our tunnel design.”

“The technology is similar to pipe-jacking technology,” he said.

“The difference is that we are jacking vertically from the bottom up. We complete a push of 1.8 metres, and then the next pipe comes and is connected to the pipe that is already jacked against the ground.

“Once the first pipe reaches the riverbed, the entire pipeline is almost complete. There will be only one piece missing — the riser head, which is basically the main diffuser. At this stage, I’ll need a team of divers to install it.”

One day at a time

Upon completion, the system will transport and treat sewage at a rate of 27 cubic metres per second, improving sanitary conditions along the banks of the river and providing a long-term and sustainable solution for safe disposal of wastewater from Buenos Aires.

The broader Matanza-Riachuelo Basin Sustainable Development Project includes a reduction of industrial discharges through the provision of industrial conversion grants to small and medium enterprises. ACUMAR will also promote improved decision-making for environmentally sustainable land use and will pilot urban drainage and land-use investments in the Matanza-Riachuelo Basin.

For Martini and his team, however, the current focus remains on the laborious task of tunnel excavation. Tunnelling works began last year and have now reached the 25 per cent mark.

“One day last week, we excavated … roughly 45 metres. A few days later, we excavated only eight metres because the ground changed. Every day on site, we say, ‘you never know what’s going to happen today’,” he said.

“The ground conditions and the operating conditions of the machine that we face every day are surprising. The reality is we are glad of every metre we excavate.”

This article originally appeared as “Crystal clear” in the December 2018 issue of create magazine.

Drive time: A major Perth road project is opening up the city’s northeast

The rich history and invaluable contributions of Australia’s nuclear reactor