The power station on the Tumut River has quite the view. (Image: Snowy Hydro Limited)

The Snowy Mountains Hydro-Electric Scheme was an ambitious engineering feat that changed the face of Australia.

In early 2019, a representative of energy company Snowy Hydro contacted a Snowy Mountains hardware retailer and placed an order for 16,000 star pickets, to be used in the preparation work for Snowy 2.0.

The staff member at the retailer, understandably, thought that the order was for a single, 1600-mm star picket. When they read the number a second time and realised the immensity of the order, it likely gave them a sense of how locals felt several generations earlier, when the world’s biggest engineering project was beginning to take shape.

It’s difficult to pinpoint an exact start date for Snowy 1.0, aka the Snowy Mountains Hydro-Electric Scheme.

Discussions dated back to the 1880s, when experts bemoaned the fact that the waters of the Snowy River flowed through mountain valleys before running on to the flats of East Gippsland and eventually streaming — somewhat wastefully, it was considered — into the sea.

If that mighty flow could be reversed so the water surged west, it would help to irrigate a massive area of dry farmland. It would offer an enormous boost to crop production, help mitigate drought risk and provide fuel to help feed the ever-increasing agricultural needs of a burgeoning nation.

"Seeing it through today’s lens, I think it’s inconceivable it would ever happen."
Roger Whitby

In 1946, the Commonwealth Government set up a committee to develop a proposal and, in late 1948, a report suggested a solution far greater than anybody had imagined.

It suggested not just re-routing the river via a series of tunnels through the mountains, but also constructing a number of dams and hydroelectric power stations, which would help pay for the venture.

The Commonwealth Government passed legislation to enable the formation of the Snowy Mountains Hydroelectric Authority in July 1949.

The project was completed a quarter of a century later, in 1974. It forever changed not just the world of engineering but also the face of Australia.

The world on our shores

Siobhán McHugh, a writer, academic, oral historian and author of The Snowy: A History, was attracted to capturing the history of the Snowy Mountains Scheme because of its human side.

“It wasn’t just the biggest engineering project in the world, it was also built by a largely migrant workforce comprising groups of nationalities who, a few years prior, had been fighting against each other in a war,” McHugh told create.

“So it was that combination of the scale of the project, which promised enormous challenges and big personalities, with the nitty-gritty of how former enemies managed to work alongside each other.”

In the beginning, McHugh said, the Snowy Mountain Authority made “some tactical errors”.

They brought in several hundred German tradesmen and billeted them all in the one place — in Jindabyne, for instance.

That made the Germans a target for other ethnic groups, such as Poles.

Things never degenerated into violence, but there was some harassment, such as stones being thrown on to the roofs of the Germans’ barracks.

“So there were teething problems, but in the camps there was such a mix of nationalities, all focused intensely on getting through this dangerous construction work, that it worked well enough,” McHugh said.

Such was the number of foreign workers — two thirds of the 100,000 workers were from offshore — that one surveyor’s assistant from Russia decided to study Serbian before learning to speak English, because it would better help him on the worksite.

"In the camps there was such a mix of nationalities, all focused intensely on getting through this dangerous construction work."
Siobhan McHugh

The major challenge of the Snowy Mountains Hydro-Electric Scheme came from the tunnelling requirements: 145 km of tunnels, plus 80 km of aqueducts.

“It has shaped the tunnel industry significantly in a number of ways. While many of the processes are a little old fashioned now, there are certain elements that are still vital to our current system.”

The Snowy Scheme generated local expertise in rock mechanics that equalled or bettered knowledge held anywhere else in the world.

It also drew in specialists from other fields, such as John Conrad Jaeger, an Australian mathematician and physicist who co-authored the book Fundamentals of Rock Mechanics, which is still regarded as among the most authoritative books in its field.

“It was the first major tunnelling use of rockbolting support, and it led to rockbolts being adopted broadly throughout the world."
Harry Asche

The project also pioneered the fundamentals of rockbolting — a method of enhancing the strength of rock by reinforcing it directly.

“It was the first major tunnelling use of rockbolting support, and it led to rockbolts being adopted broadly throughout the world as a type of tunnel support,” Asche said.

All 145 km of tunnelling were constructed using drill and blast.

A rail ran up to the face and on that rail ran a car — a ‘drill jumbo’ — containing platforms that allowed men to stand against the face at multiple levels, each drilling a hole.

Those holes would be blasted and, once the rubble was removed, the arch would be supported by rockbolts and steel arches. 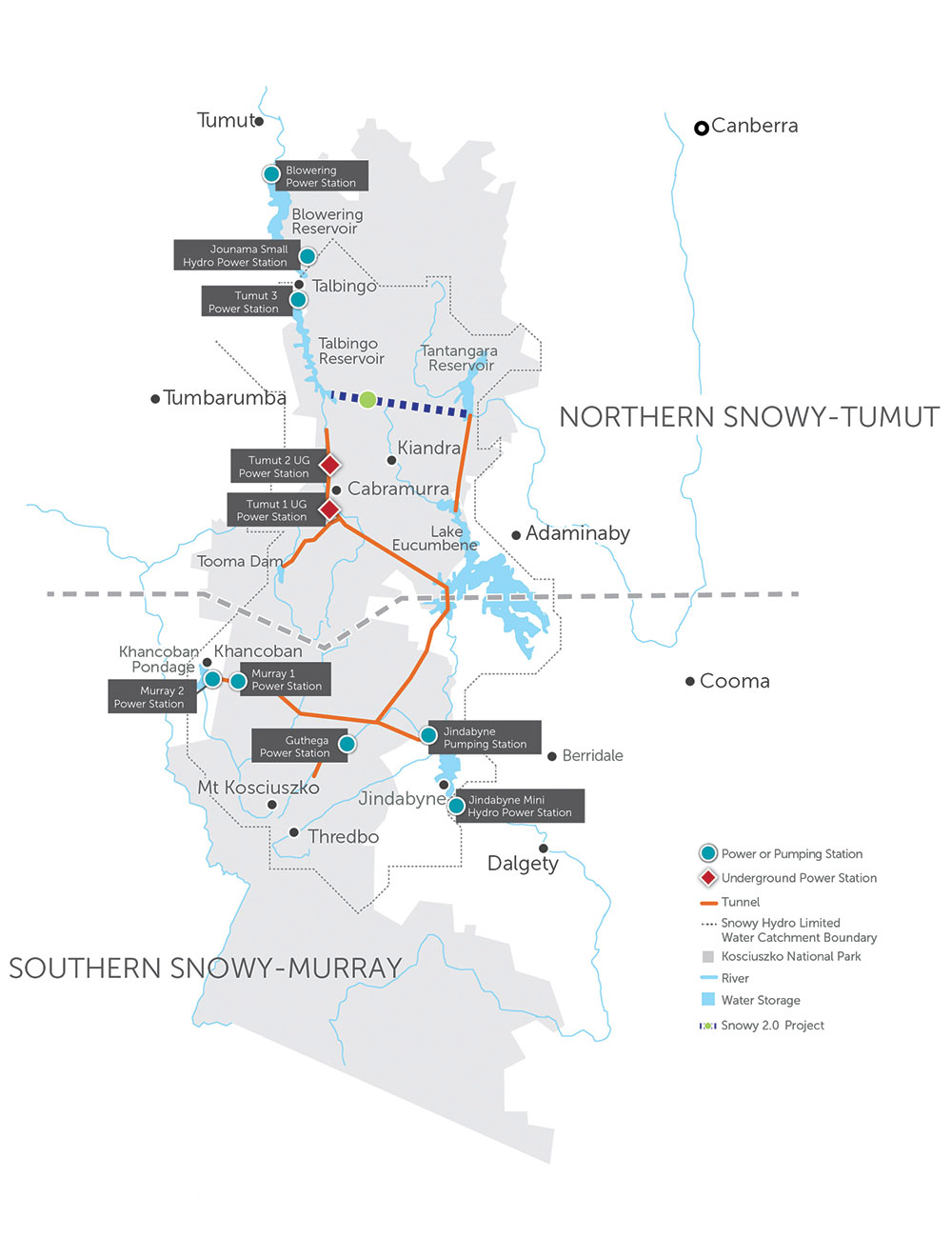 Today, Asche said, a substantial number of the tunnels would be drilled with a tunnel boring machine.

Using this machinery, the daily rate of advance per heading would likely be around three times faster than it was during the original Snowy Mountains Scheme.

One other major difference would be the safety aspect. On the original build, 121 workers lost their lives. Even a single death today would be considered unacceptable.

Roger Whitby is an electrical engineer and Chief Operating Officer of Snowy Hydro.

He has worked with the company for 35 years and seen the industry develop while he has worked on this most iconic of engineering projects.

He’s not sure if the same initiative would stand a chance if it were suggested today.

“In terms of damming up river valleys, importing all of the workers, environmental impacts and modern safety standards, etc., seeing it through today’s lens, I think it’s inconceivable it would ever happen,” Whitby said.

Some standards and expectations change, and some do not.

One that remains the same is the expectation that a major project, such as Snowy 2.0, will benefit the local community during its construction.

“There are a lot of opportunities and local jobs,” Whitby said.

“We need to leverage them for the benefit of the surrounding communities.

“Already, for example, about 70 businesses based in the Snowy Mountains have been directly involved in the Snowy 2.0 project. And we’re only just getting started.”

One of those businesses is the local hardware retailer that has just placed a special order with its suppliers for 16,000 star pickets.

And that order is just the beginning.

Snowy 2.0, says Snowy Hydro Chief Operating Officer Roger Whitby, is a visionary project that is almost as grand as its older sibling.

“We see Snowy 2.0 as being absolutely crucial to the transformation that’s happening in the broader electricity and energy space,” Whitby says.

“Renewable energy is coming, and Snowy 2.0 is an absolutely vital part of that energy transformation. We are a clear enabler of it.”

Snowy 2.0 is a project that links two existing Snowy Scheme dams, the Tantangara Reservoir and the Talbingo Reservoir, through 27 km of underground tunnels — each about 10 m in diameter — and a power station located almost one kilometre underground.

To generate power, water will be recycled between the two dams, flowing through six giant, reversible turbines.

The reversible nature of the turbines means water can be pumped back to the higher dam at times of low energy demand. At times of peak energy demand, gravity will bring the water to the lower dam, via the turbine.

Pumped hydro operates in a closed system, so the water is then released so there are no impacts on downstream water users or changes to environmental flows.

This article originally appeared as “Shaping a nation” in the August 2019 issue of create magazine.

Tritium is bringing fast, easy electric vehicle charging technology to a highway near you

The engineers recognised in the 2020 Queen’s Birthday honours