After years of careful planning, hard work and engineering ingenuity, central Perth’s newest skyscraper is complete, and it is casting a green shadow over its neighbours.

Standing sleek, imposing and 32 storeys high, the newest addition to Perth’s skyline is setting a benchmark for sustainable office buildings.

Rising from the shadows of what was the iconic Emu Brewery site on Mounts Bay Road, the recently completed office tower heralds a major milestone of the broader $1 billion Capital Square project.

Towers 2 and 3, which are slated to become a 34-level hotel and a 40-storey apartment tower respectively, are yet to start construction.

Tower 1 has been awarded six stars by the Green Building Council of Australia in both the Design v3 and Round One As Built ratings, and has a net lettable area of 53,600 square metres.

Oil and gas company Woodside has designated the building its new global headquarters and recently moved its staff to the premises.

Tower 1’s structural and civil engineering consultants Arup told create that the developer’s mandate to construct an environmentally friendly project meant they had to ensure the structural systems allowed the materials to work efficiently and effectively throughout the structural design.

Arup Associate Principal and structural engineer Dr Craig Leech said a project the size of Tower 1 was almost certain to be a concrete structure.

The mix substituted 40 per cent of the Green Star-standard Portland cement content with the furnace by-product.

“With GGBS you can get the same strength compared to Portland, and often better strength after 28 days,” Leech said.

“However, the GGBS by-product can retard the setting of concrete.”

The post-tensioned slab and beams, which are part and parcel of concrete floor plates in Australia, need to reach a certain strength before you can stress and move on to the next floor, he said.

If you stress the concrete a few days after pouring and it is not strong enough, the concrete fails in a dangerous manner, ultimately slowing down the project.

“So, we allowed more conventional mixes on floor plates where there is a requirement to get a high early strength, delivering the right concrete mix where you want your cycle time to be fast,” Leech said.

“Because the Green Star calculation is performed on the whole building, with the right specifications there is very little penalty on those critical elements.

“This is because you make a greener mix in the columns, piles and walls where you don’t need high early strength and can specify reaching the design strength at 56 days, realising the benefits of the GGBS.”

Arup Associate Principal and structural engineer David Williams said one way they minimised material usage was post-tensioning the concrete, which meant the slabs could be thinner.

The floor plate measured a generous 20 metres from the building core to the perimeter, and conventionally may have been designed with two 10-metre spans, and a column in the midspan and perimeter, he said.

“However, with the architect and developer, we tuned the column position to about six metres from the perimeter and balanced a cantilever with the back span so that the beam depth is constant, and they are both working efficiently and in balance.”

This approach meant they ended up with one column rather than two, halving the number of columns and foundations, Williams said.

“In that particular building it also means that at the edge of the building you get this amazing vista of Perth and the Swan River without columns blocking the view.”

The building has a closed-loop firewater testing system so that any water expelled for fire testing can be recaptured for later use.

Gibbs said that NDY designed Tower 1 with a 70-kilolitre rainwater harvesting tank that collects water for irrigation and toilet-flushing.

“The building’s predicted water consumption was 0.49 litres per day per square metre with the efficient fixtures and fittings,” she said.

“But after rainwater harvesting was considered for toilet flushing, that brought water consumption down to 0.45 litres per day per square metre.”

With the net lettable area of 53,640 square metres, greenhouse gas emissions averaged out to 56 kilograms of carbon dioxide emissions per square metre per annum.

Gibbs said designing and building a sustainable high-rise office tower in the middle of the city presented unique challenges for the project team.

They were building a big glass box in a hot climate surrounded by other similar structures, so balancing high-performing thermal outputs and energy consumption was a lot of work, Gibbs said. 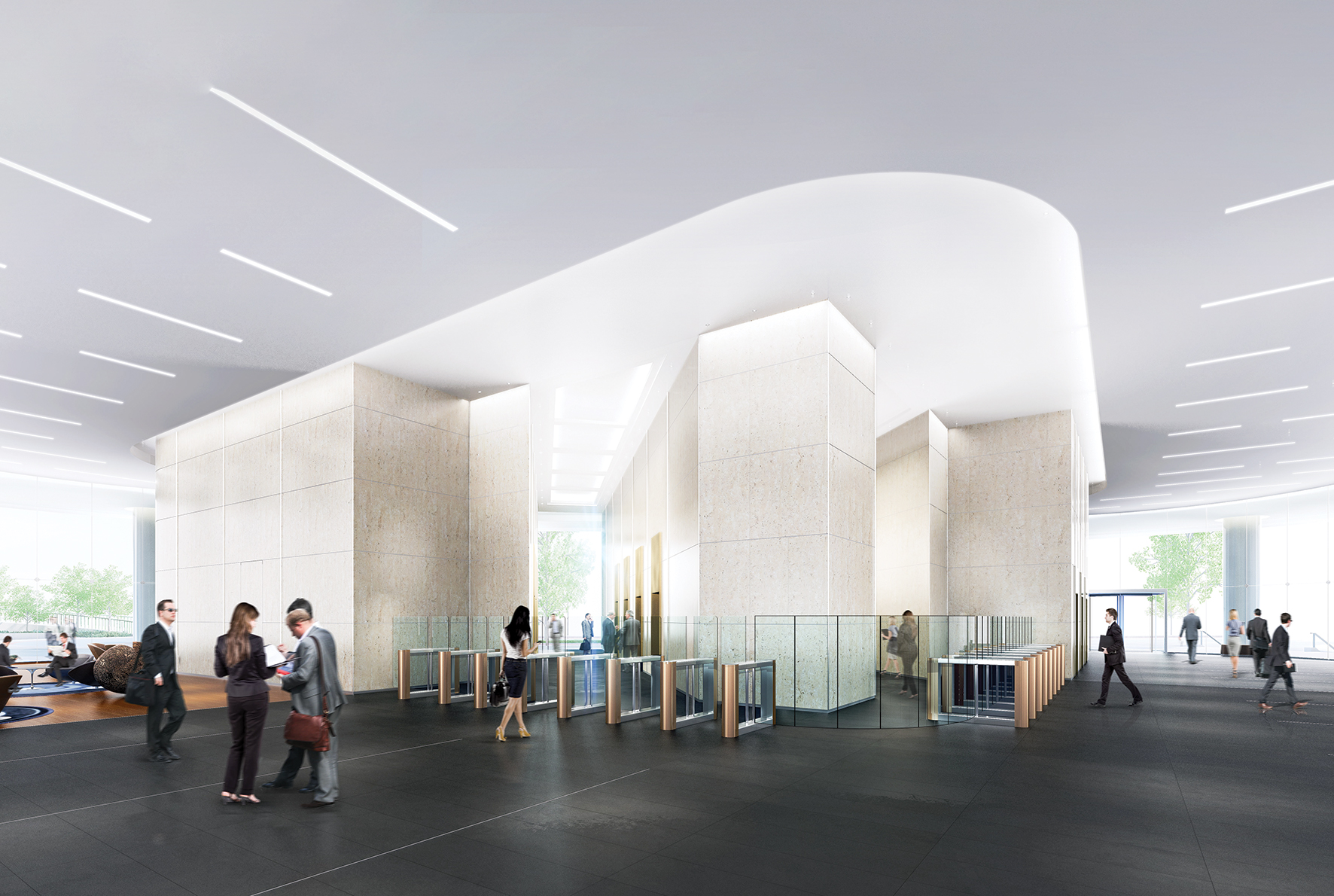 A lot of back and forth went into determining the best outcomes and where they could compromise.

“The project provided some opportunities too, because it was so large that you are almost driving change in the marketplace by that single project,” she said.

“So any subcontractor or supplier who wanted to work on the project needed to adhere to strict environmentally friendly rules and processes before they were even considered to participate.

“That was the case for Tower 1, and this was similar to the BHP Tower fit-out in Brookfield Place that NDY did the Green Star fit-out for.”

This sentiment was echoed by the project’s builder, Multiplex, which made sure the ecologically sustainable development requirements were embedded in every drawing and every contract awarded on the job.

Multiplex Project Manager Luke Vibert said that ensuring subcontractors and suppliers met sustainability targets became a core part of the design and procurement criteria throughout the project. In terms of major obstacles, Vibert said the ground conditions of working on a former industrial site located on a tight footprint in the middle of the CBD posed the biggest challenge for the project.

“It’s also a heavily sloping block and close to the water table, so a lot of work had to be done in terms of ground improvement and drainage,” he said. 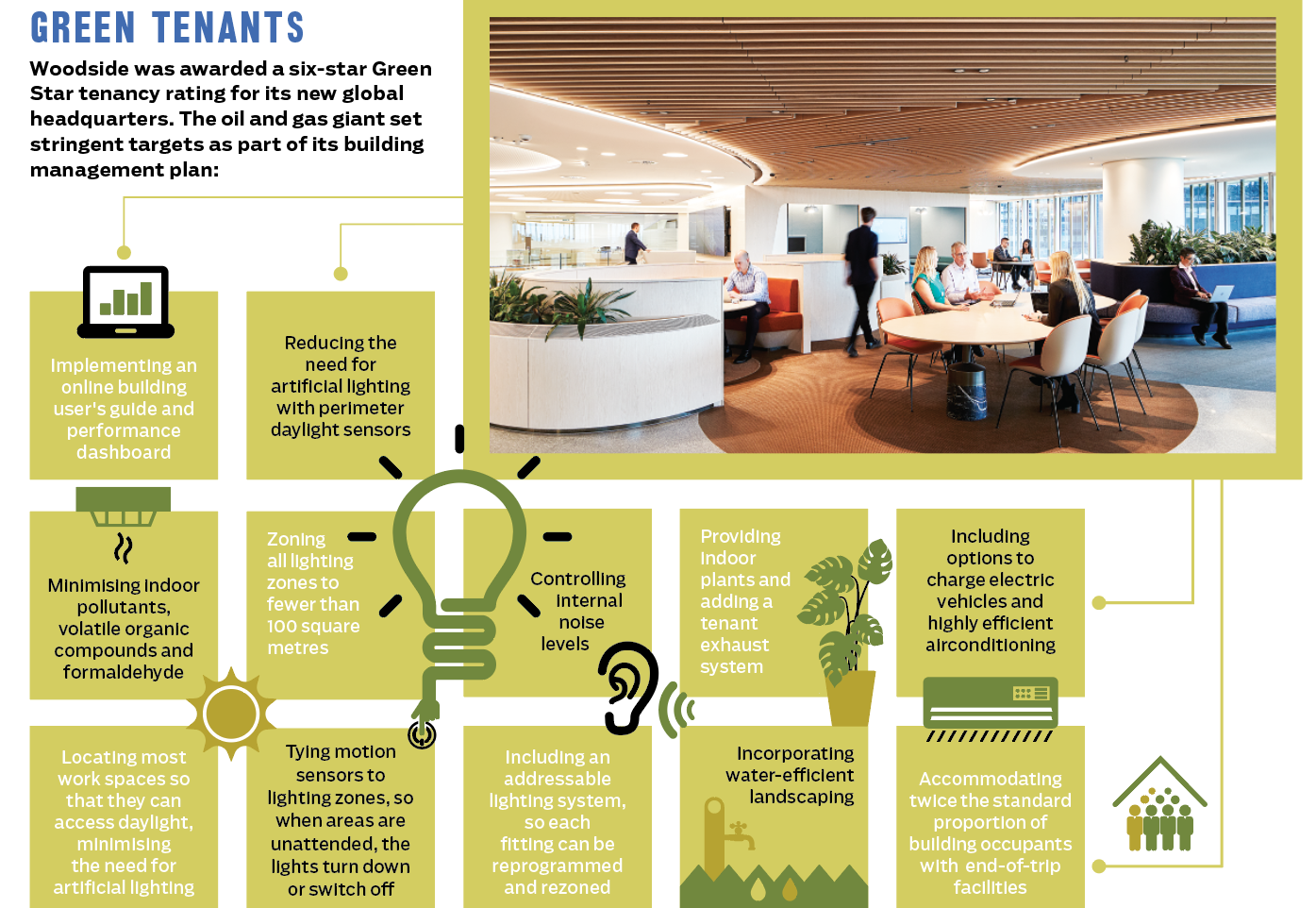 This article originally appeared as “Rising star” in the December 2018 issue of create magazine.