Piezoelectric materials are useful substances that can create electricity from movement. The challenge for one class of these, however, is creating it in sheets large enough to be used.

When Dr Nitu Syed started looking for something to do with her expertise in nanomaterials, she knew that she wanted to work on a project that would have a positive effect on the world.

Thinking about the importance of sustainable energy on the environment, she turned her attention to piezoelectric materials, an ingenious subclass of nanomaterials that convert mechanical energy into electricity.

“It is really a very exciting property,” the RMIT Research Fellow told create. “So that’s why we thought, let’s try something different and let’s create a new nanomaterial.”

Nanomaterials are ultra-thin — 1000 times thinner than a human hair — making them perfect for complex electronic devices that need their components to fit into small spaces. And while, when it comes to piezoelectric materials specifically, engineers usually use quartz, Syed had something else in mind.

“But if you make any device with gallium phosphate, you can use it up to 900 degrees [Celsius], which is desirable for many devices, as it gives us a broader temperature range that has better application.”

Syed was not the first person to notice gallium phosphate’s thermal stability; the substance has been used in technology like pressure sensors since the late 1980s.

“If you make any device with gallium phosphate, you can use it up to 900 degrees.”
Dr Nitu Syed

But what has thwarted engineers who want to take advantage of its useful attributes is that it is difficult to synthesise; researchers had not been able to produce it in the form of large, thin sheets that make it useful for nano-electronics.

“It doesn’t occur in nature like many metals,” Syed explained. “You need to grow it synthetically in a lab or in a factory. It is very difficult to grow, and no one has created ultra-thin nanosheets of gallium phosphate before.”

The few researchers who had come close — an Austrian team, Syed said, managed to produce crystals of the substance on a commercial scale — had been using an expensive and energy-intensive process.

Syed’s approach, however, works without super-high temperatures and can take place in open air, outside of specially controlled environments.

“Fabrication of the gallium phosphate film was actually a big challenge,” she said. “We have used a novel liquid metal printing technique.” 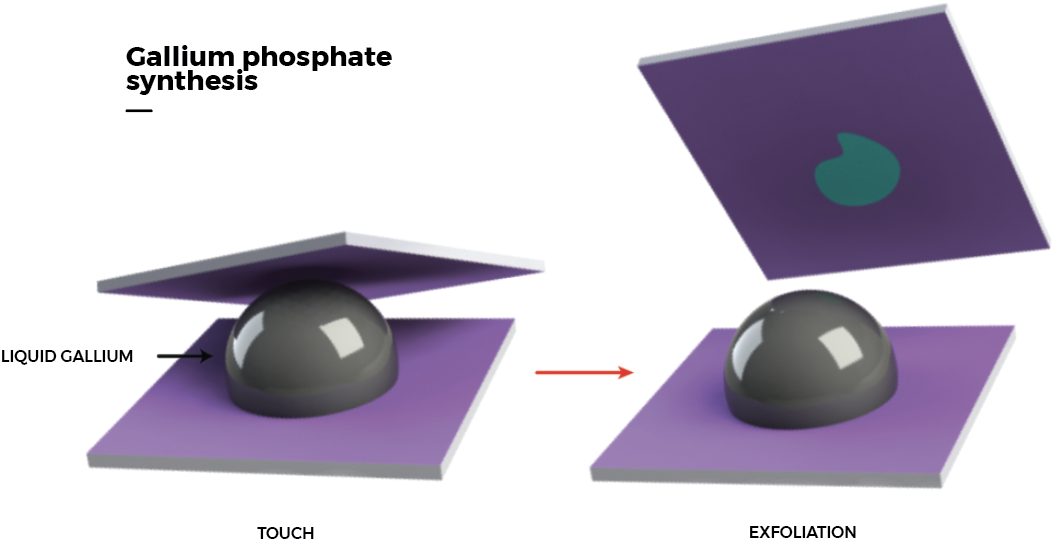 A 2018 paper co-authored by Syed and published in Nature Communications describes this two-dimensional printing and synthesis technique.

“Gallium phosphate (GaPO4) is an archetypal piezoelectric material, which does not naturally crystallise in a stratified structure and hence cannot be exfoliated using conventional methods,” she said.

“We exfoliate and surface print the interfacial oxide layer of liquid gallium, followed by a vapour phase reaction.”

Most of this can take place at room temperature, making it much cheaper than other conventional approaches.

The material produced can be integrated with a wide range of existing electronic technologies. The new process is scalable and cost-effective, significantly expanding the range of materials currently available to the piezoelectric industry.

Syed mentioned an installation in the Tokyo Subway as an example of piezoelectric material in action.

“Fabrication of the gallium phosphate film was actually a big challenge. We have used a novel liquid metal printing technique.”
Dr Nitu Syed

“The government has used a piezoelectric pavement slab, so, when people walk over [it], they are actually vibrating that piezoelectric slab,” she said. “That slab creates electricity, which is in turn used for powering the streetlight or other electrical equipment.”

Syed’s material still requires refinement and additional investigation before it will be ready for such everyday uses.

“If we can actually make piezoelectric nano-generators or energy harvesters, they can produce the energy that we need in future,” she said.

“We are also focusing on creating some flexible piezoelectric self-powered systems … that will help the future of the world.”

In the meantime, she has turned her attention to other nanomaterials with potentially useful properties.