Professor Veena Sahajwalla is using the science of micro-recycling to show that everything that exists in a physical form has worth.

When Bruce Jeffreys talks about his business, the prescription glasses retailer Dresden, he doesn’t refer to it as a newcomer in the marketplace.

He also refuses to be defined as an entrepreneur disrupting the industry.

Instead, he said, he is launching an entirely new industry.

It is one that produces prescription eyeglasses, but its unmistakable and absolute point of difference is the fact that every product sold by Dresden is made with recycled plastics. They are also made in such a way that they can be completely recycled back into the business to fuel future production.

In this way the business is circular. It is a closed loop of fully recycled products with diminutive environmental impact. The prescription glasses industry as we know it is the polar opposite.

“Fundamentally, we’re taking on one of the least recyclable, least circular-economy products that exist in the world — prescription eyeglasses,” Jeffreys said.

“They traditionally require a huge number of steps in their manufacture. They involve a lot of carbon intensity and a lot of labour. The end result is a product that is difficult to even re-use once.

“So, we redesigned the glasses system from scratch so that someone could, for example, swap the lenses in and out. If they break an arm of the frame, they can instantly replace the arm, and the broken part can be recycled back into the system. But in reinventing how they are manufactured we also created a better product, one that is strong and durable. That’s why we offer a lifetime warranty. We now have a new, completely unique, patented manufacturing system.”

Environmentally friendly. Recycled and recyclable. Strong and durable. Lifetime warranty. It must be an expensive offering for the end user, yes?

A pair of standard-lens Dresden spectacles costs just $59. All recycling and manufacturing of Dresden products, currently at retail online and in branded stores across Australia, New Zealand and Canada, happens at a micro-factory in Sydney.

It is a perfect example of the economic, scientific and environmental model that Scientia Professor Veena Sahajwalla, an ARC Laureate Fellow and Engineers Australia Honorary Fellow, hopes will be taken up by numerous industries in the near future.

“We’re taking on one of the least recyclable, least circular-economy products that exist in the world — prescription eyeglasses.”
Bruce Jeffreys

Sahajwalla is the founder and Director of [email protected], the Centre for Sustainable Materials Research and Technology.

It works with industry, both local and global, as well as governments of all levels, global research partners and not-for-profits, to develop innovative solutions for what it describes as one of “the world’s biggest waste challenges”.

Dresden, which has partnered with the Centre, is one example of a successful outcome.

On a much larger scale, ‘green metal’, manufactured using a process that uses used tyres — Australia produces more than 50 million used tyres every year and recycles less than five per cent of them — is also now in play.

“With a lot of these things that we are working on, success comes down to what it is you’re trying to make,” Sahajwalla said.

“The science we are developing, called micro-recycling science, is to reveal what happens at the micro level and below when materials react with each other.

“If we look at the example of a magnet that contains a rare earth element like neodymium, how do we isolate that element in order to recycle it?

“That comes back to understanding micro-recycling science. If somebody gave me a brand-new machine that can crush these magnets down to a fine powder, that is not going to help me. But the science will show us a way.” 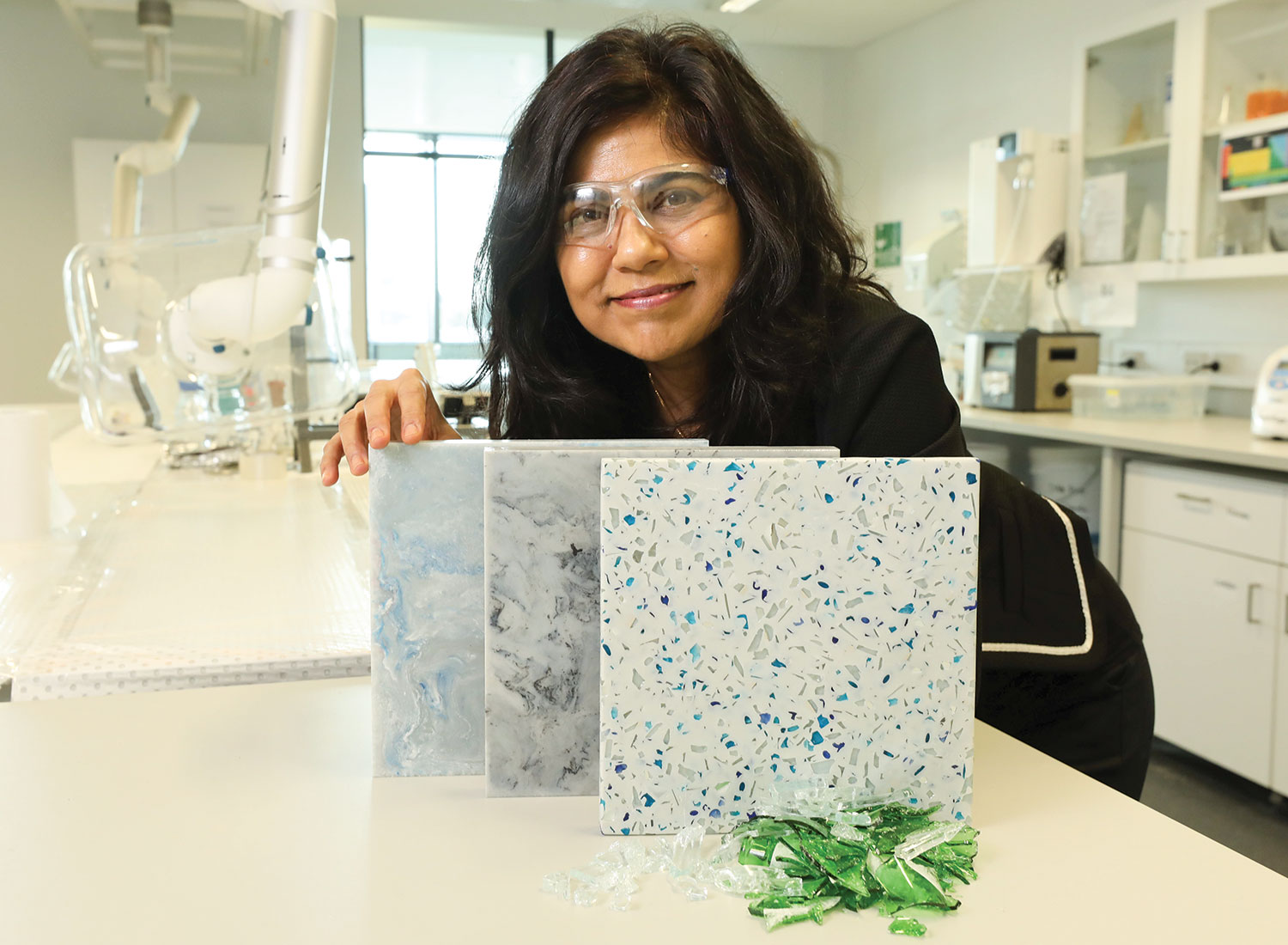 She is also excited about the opportunity to turn old clothing into building materials.

If the idea seems crazy, she said, it’s because we are looking at a macro view.

But when we look at resources on a micro level and understand reform of structure and composition from a molecular perspective, things look very different. Fibres in textile products can be broken down into micro components and can then be restructured into different types of high-quality products. Science shows us the way.

“The science we are developing, called micro-recycling science, is to reveal what happens at the micro level and below when materials react with each other.”
Veena Sahajwalla

Sahajwalla’s vision for the future is for Australia to become a model to the rest of the world, boasting industries that are fuelled by their own waste as a result of smart science and cutting-edge engineering.

It’s such a compelling idea that the New South Wales (NSW) State Government, via its Office of Chief Scientist and Engineer, has announced the formation of the NSW Circular Economy Innovation Network at UNSW Sydney. Sahajwalla has been appointed its Director.

Growing up in India’s most densely populated city, Mumbai, with its population of more than 18 million, Sahajwalla saw the best and worst of waste management.

On one hand, mountains of waste were produced by the city every day. But on the other hand, families and businesses, by necessity, would make use of this waste in their daily lives.

They would search out the waste they needed — old bottles or garments, paper waste or building refuse — and create something new.

She couldn’t help but be influenced by this childhood experience, Sahajwalla said, in the development of her career.

“If we look at the example of a magnet that contains a rare earth element like neodymium, how do we isolate that element in order to recycle it?”
Veena Sahajwalla

Then there was the fact that her father was a civil engineer. She would sometimes visit the sites on which he worked, fascinated by the way things came together to create something useful, something that would make life easier for residents of the megacity.

At the Indian Institute of Technology, Sahajwalla was one of a handful of women earning an engineering degree. When she moved away to study — a materials engineer, she earned her master’s degree at the University of British Columbia and her PhD at The University of Michigan — she realised the developed world shared similar waste problems. 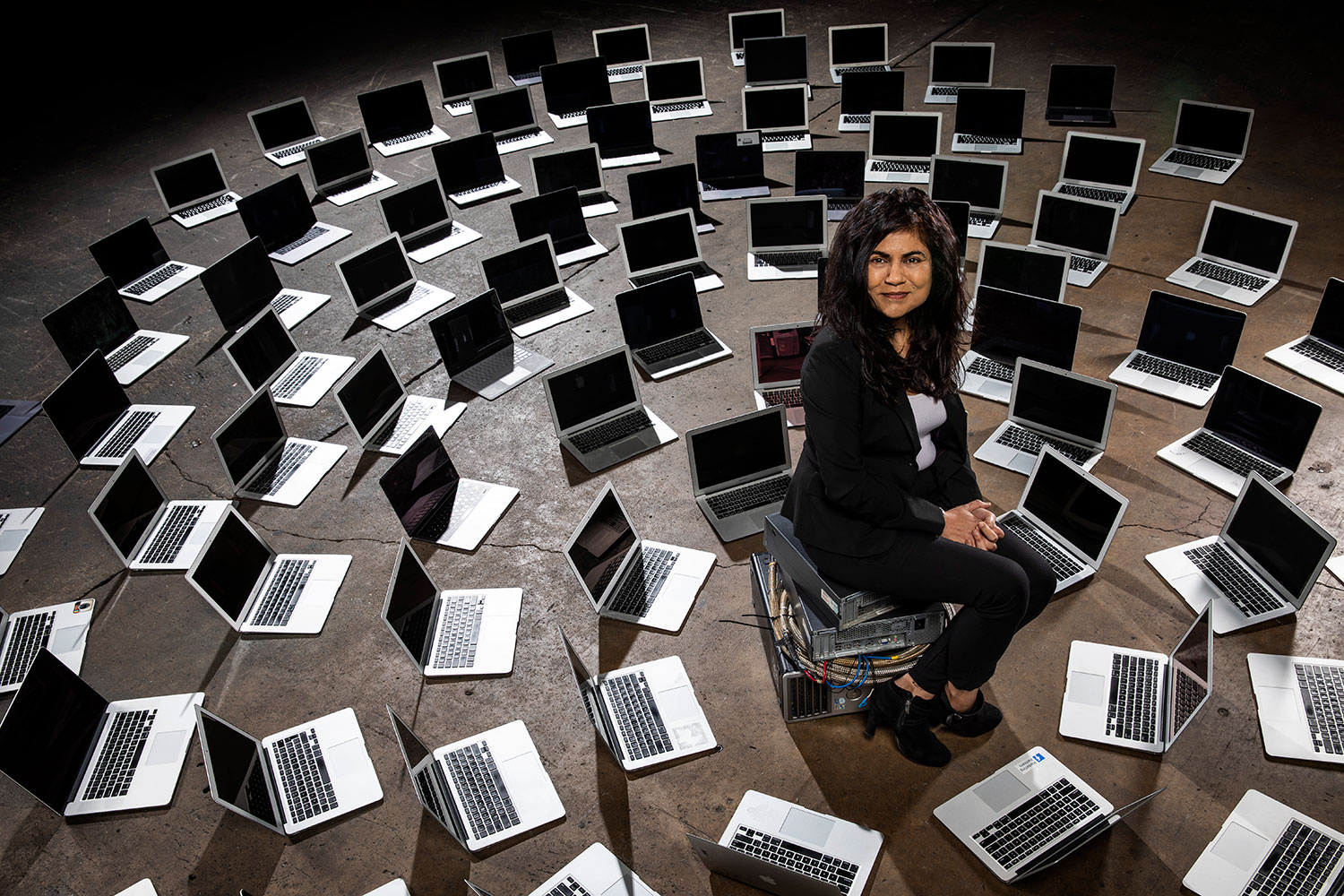 Then, in the 1990s, she accepted a job with the CSIRO in Melbourne.

It was only for a few years, she told herself. Soon she’d head back to India to live and work or return to the United States.

But that job was followed by a role at the University of New South Wales. Soon it was clear to her that her vision aligned very well with Australia.

Here, Sahajwalla could pursue her new science and technology interests and begin to turn into reality her dream of transforming waste resources into value-added materials.

Now, her vision is global. Using micro-recycling science, Australia can play an important global role, she said, by becoming a vital example of a properly circular economy and then on-selling that expertise and knowledge.

“By recognising materials security as an important part of how we see our use of products — if we can be part of the global supply chain by having a component or a material being made in Australia, and we’re exporting to another destination — that is a powerful thing to be a part of,” Sahajwalla said.

“It gives us a seat at the table of manufacturing materials. It means Australia becomes an important part of the global ecosystem.”

In the last few years a great deal of troubling information has been released about recycling practices in Australia.

While households have been faithfully sorting bottles and paper-based waste into their recycling bins for collection each fortnight, most doubt that the waste is ever recycled.

At the beginning of 2018, it was revealed that much of Australia’s recycling waste was being sent to China. This only made headlines because China stopped accepting much of this waste.

Suddenly, hundreds of thousands of tonnes of waste material was looking for a new home in Australia. 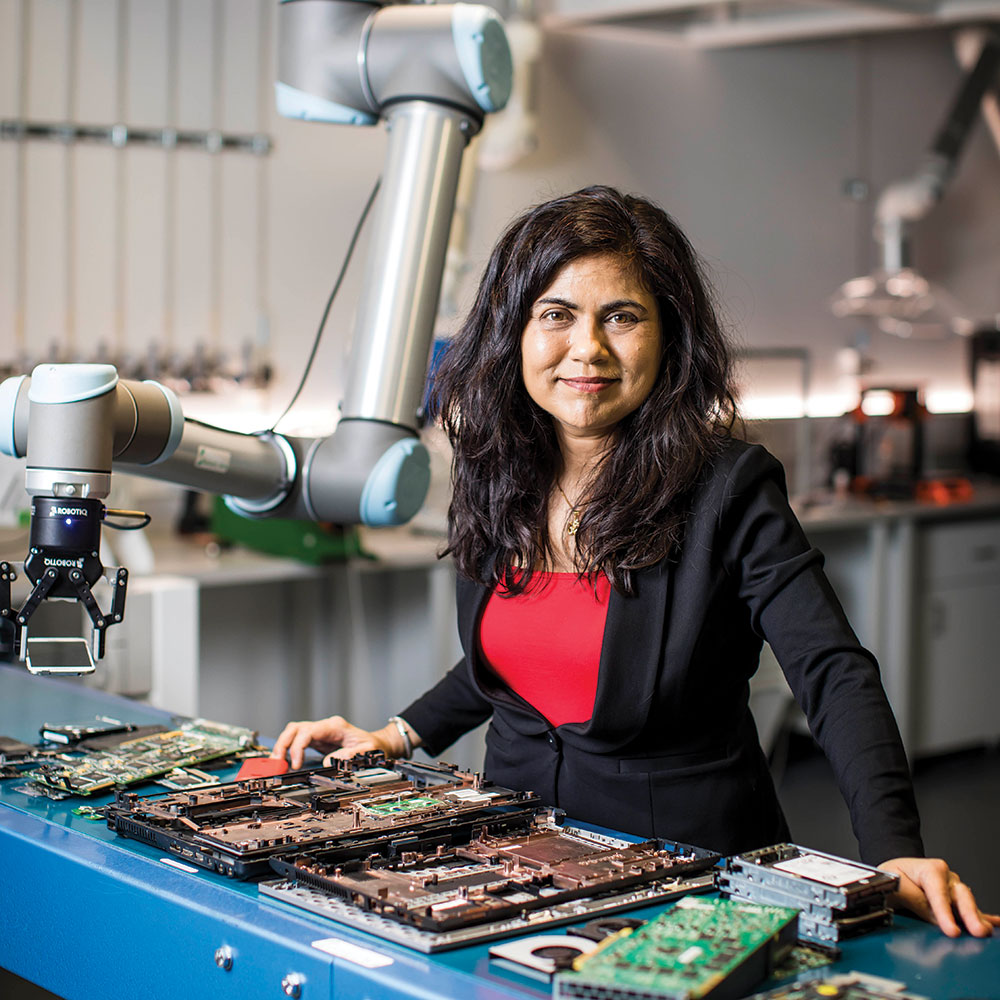 Waste management businesses had no idea what to do.

But Sahajwalla believes we should welcome such an opportunity. In fact, she said, we should accept selected waste resources from other global territories, transform them into niche materials, and export them again, delivering clean and sustainable materials to the world.

Right now, the challenge is to engineer the machinery that will fulfil the demands of micro-recycling science and introduce what Sahajwalla calls ‘the fourth R’: reduce, reuse, recycle and reform.

“We can’t just buy machinery off the shelf,” she said.

“We have to design systems that are able to help us recycle complex materials. So, we’re in the process of developing new designs and new technologies, building machines with our industry partners, like MolyCop, based on the science.”

It’s important that the factories are ‘micro’, Sahajwalla said, because traditional factories have always been about sourcing raw materials on a grand scale, having a large production capacity and making products cheaper as a result of economies of scale.

But micro-factories can produce higher value materials in smaller quantities and can be established in areas of demand to satisfy local needs first, then export to the world as expertise increases, thereby developing a new concept of ‘economies of purpose’.

“In a place like Australia, where there are large distances to cover, the economics of centralised manufacturing simply do not work out,” Sahajwalla said.

“A distributed form of manufacturing makes much better sense.”

“We can’t just buy machinery off the shelf. We have to design systems that are able to help us recycle complex materials.”
Veena Sahajwalla

Sometimes all of this — creating treasure from trash — seems a crazy idea, she admits.

But industry and government are beginning to understand the science of micro-recycling and the enormous innate value and efficiencies of a circular economy.

Best of all, consumers love the idea — as Jeffreys has discovered with his prescription glasses company.

“It’s amazing, the business has exploded,” he said.

“The recycling side of things is a real economic value driver. From a customer point of view, for so many people it’s the solution they’ve been looking for. And from a staff perspective it’s really satisfying because we get to give people an affordable and accessible gift of vision. We’re solving so many problems with the one simple solution of recycling.”

Veena Sahajwalla will be discussing how to revolutionise recycling to redirect waste into production at the World Engineers Convention 20-22 November in Melbourne. To learn more and to register, click here.

When can we expect autonomous taxis to take over our roads?

Algae biofuels could be the low-emission fuel of the future

One company is recycling plastic waste into railway sleepers

WEC 2019: “We can’t build a better world without a better construction industry”

Details about groundwater supplies surface thanks to new research facility

Algae biofuels could be the low-emission fuel of the future