The ingenious engineering that helped secure the success of D-Day

What do you do when you need to stage a marine campaign but have no harbour? You create your own and bring it with you.

Today, 6 June 2019, marks the 75th anniversary of D-Day, when Allied troops stormed the beaches of Normandy to reclaim France’s coastline and shift the balance of power in World War II.

As remembrances continue, stories are being told about the ways engineers and technologists helped with the operation. Here’s a look back at one of the most significant feats of military and civil engineering: the Mulberry Harbours.

Some leaders were dubious about the chances of success from the sea. The failed marine campaign to capture Gallipoli during World War I still haunted the likes of UK Prime Minister Winston Churchill, and commanders were conscious of the risks: troops could get trapped on the beaches and become sitting ducks for Axis soldiers.

To succeed, American, British and Canadian armies needed to get tens of thousands of soldiers plus weapons, ammunition, vehicles, tents, medical personnel, food and clothing ashore from day one of the invasion. 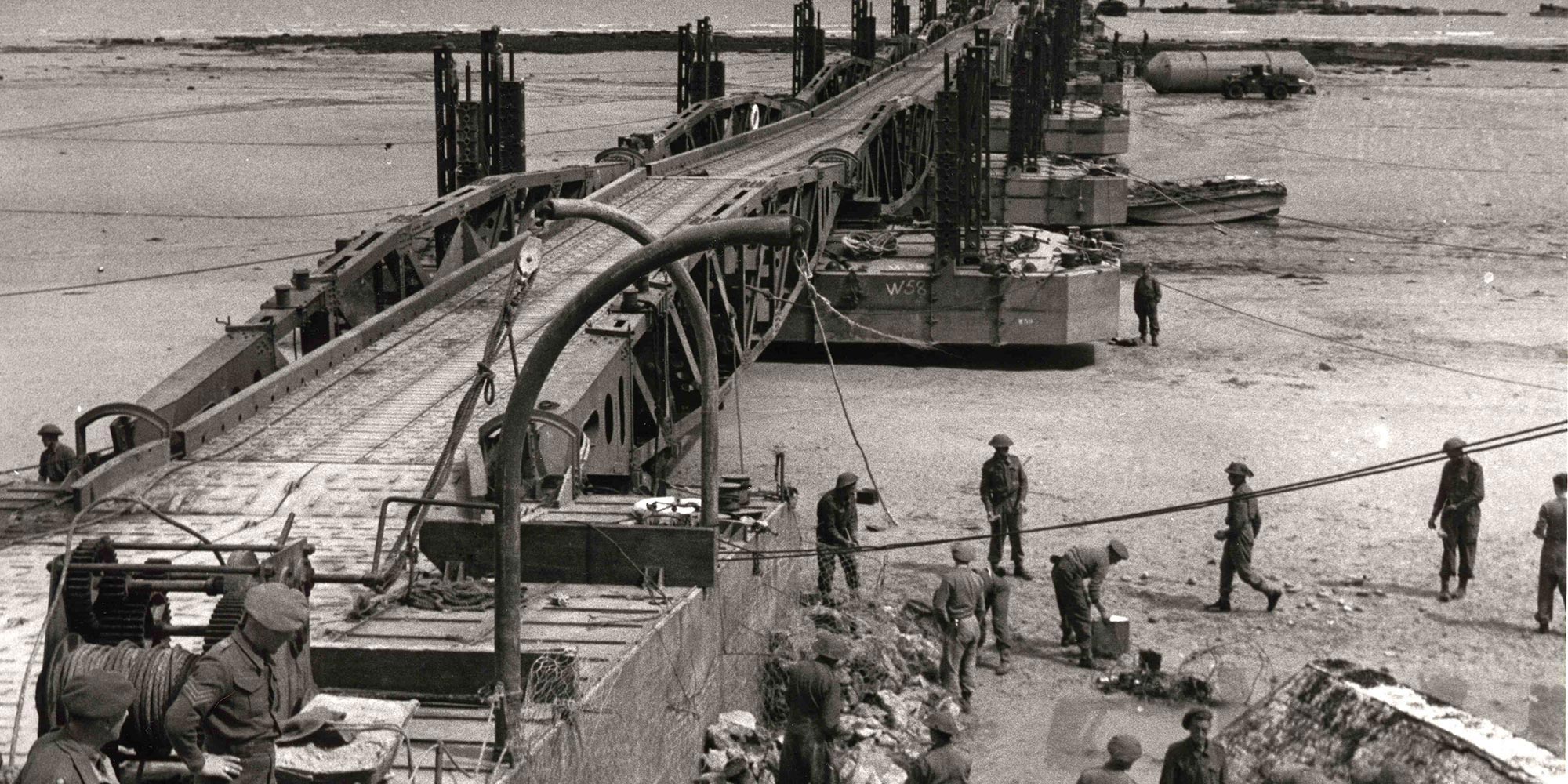 This moment was pivotal in shifting the balance of power in favour of Allied forces — and it could have gone horribly wrong. But a previously untested technology, artificial ports, helped ensure the success of this risky move.

Two if by sea

Getting people and materials from ship to shore was a huge logistical challenge, especially as they would need to battle against waves, currents and tides before the real fighting even began.

To create a smoother journey, a team of engineers, scientists and military officers designed a marine staging area consisting of two artificial ports made from floating piers anchored to the seafloor.

Known as the Mulberry Harbours, not only did these provide an anchor for Allied ships, they also created an artificial breakwater. Parts were towed 50 km across the English Channel on D-Day and sunk into place about 1.6 km off the French coast. One was assembled off Saint-Laurent at Omaha Beach (Mulberry A) and the other off Arromanches at Gold Beach (Mulberry B).

The Mulberry Harbours have their origins a few years earlier, and were brought up in conversations and memos about the war effort. In 1940, civil engineer Guy Maunsell proposed the idea to the War Office, and Churchill issued a famous memo titled ‘Piers for use on beaches’ in 1942, writing:

“They must float up and down with the tide. The anchor problem must be mastered. Let me have the best solution worked out … Don’t argue the matter. The difficulties will argue for themselves.”

In mid-1943, a team of civil engineers was tasked with converting selected sites along the French coastline into sheltered harbours. There were initially three potential designs: a system of ‘hippo’ piers and ‘crocodile’ bridge spans; a ‘Swiss Roll’, which consisted of a floating roadway made of waterproof canvas stiffened with slats and tensioned with cables; and a floating bridge linked to a pier head, with legs that were raised and lowered with the tide.

Through a series of trials, the latter emerged as the design that could hold up best against environmental factors and the rigours of the operation — the harbours would need to handle 12,000 tons per day excluding motor transport and in all types of weather.

All together, about 400 prefabricated concrete caissons (dubbed ‘Phoenixes’), floating piers and roadways (‘Whales’ and ‘Beetles’), breakwater ships (‘Corncobs’ and ‘Gooseberries’) and pier heads (‘Spuds’) travelled across the Channel on the afternoon of 6 June 1944.

According to the UK Institute of Civil Engineers, creating these elements was a massive feat of engineering. The caissons alone used 31,000 tons of steel and 1.4 million metres of steel shuttering. The largest of the caissons measured 60 metres by 17 metres and were five storeys tall.

Once complete, each Mulberry Harbour contained about 10 km of piers and jetties, giving troops “1 square mile [2.6 square km] of quiet, wave-free ocean from which to stage the invasion”, wrote Professor Colin Flint, who authored a book on the harbours, in a piece for The Conversation.

The Mulberry Harbours supported 200 military ships and landing crafts carrying 180,000 men in the first week. Although Mulberry Harbour A, used primarily by American troops, was damaged during storms a couple of weeks later, British and Canadian forces continued to use the other Mulberry Harbour (unofficially named Port Winston). Port Winston was reinforced, and for 10 months provided passage for 2.5 million troops, 500,000 vehicles and 4 million tons of supplies until major French ports could be captured and used.

Parts of Port Winston still exist today off the coast of Arromanches and are now a memorial site.

Mulberry Harbour engineers also investigated the possibility of a similar arrangement for an invasion of Japan, but the bombings of Hiroshima and Nagasaki removed that need.

Axis defences on the beaches of Normandy took two years, 13 million cubic metres of concrete and 1.5 million tons of steel to construct. As German Minister of Armaments and War Production Albert Speer said of the Mulberry Harbours during his trial at Nuremberg for war crimes, “A fortnight after the landings by the enemy, this costly effort was brought to nothing because of an idea of simple genius.”

Going full circle: How engineers can help give new life to old materials

This wearable technology could make every room just the right temperature

We’ve had fires, floods and pestilence, but is Australia prepared for the next earthquake?

This wearable technology could make every room just the right temperature