ANU researchers are making real progress on a safer form of X-ray imaging.

Medical tests such as X-rays, CT scans and PET scans are vital tools for diagnosing diseases.

While there are numerous benefits to these types of tests, they can expose patients to higher than normal doses of radiation.

Exposure to too much radiation from medical imaging can increase the risk of cancer, which can limit how often patients can be tested.

However, a new study led by The Australian National University (ANU) has found a way to greatly lower X-ray doses, potentially making them cheaper and safer and improving early detection of diseases like breast cancer.

The research team, which has involved the European Synchrotron Radiation Facility and Monash University, has built upon an unconventional approach known as ‘ghost imaging’.

A key aspect of the technique is that most of the X-ray dose is not directed towards the object.

Instead, the measurements are computed by shining light on to the object in different patterns.

“You’re computing what the object looks like based on a set of measurements,” said Dr Andrew Kingston from the ANU Research School of Physics and Engineering.

“If you already know, more or less, what the object should look like, then you only need to take enough measurements to see how it’s different from what you expect rather than having to image it from zero knowledge.”

The concept of ghost imaging, although having been around since 1995, was only first demonstrated with X-rays in 2016 and has just now been extended to 3D-imaging.

Ghost tomography can be carried out by applying 2D ghost imaging to an object at many angles and then using standard tomography techniques to create a 3D image from all the ghost projections.

But the team showed that method didn’t work very well using the data they collected.

“We developed a technique to reconstruct the 3D data directly from the measurements rather than computing the projection images at each angle and then computing the 3D image, which actually didn’t give us anything useful,” Kingston said.

“We discovered that by directly computing the 3D image from measured data, we could recover an image of the object because we are using the data more effectively.” 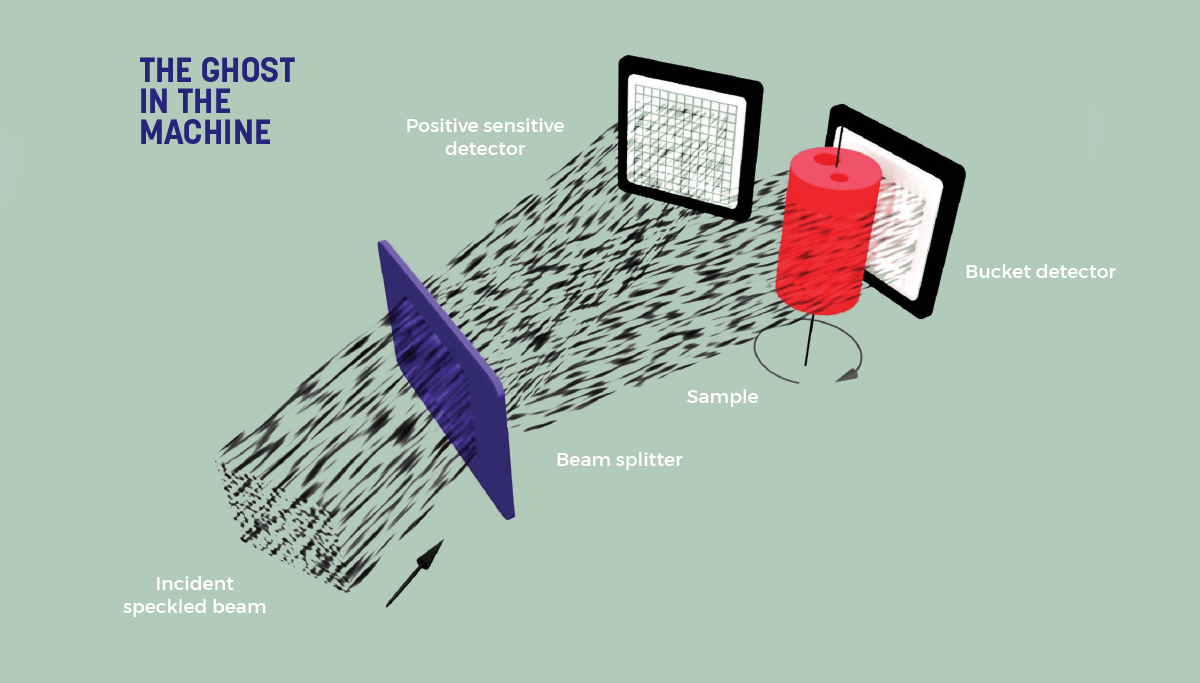 In a world first, the team has extended a 2D concept to obtain a 3D image of the interior of objects that are opaque to visible light.

This involved taking a 3D ghost image of a 5.6 mm diameter object at a low resolution of about 0.1 mm, using the new measurement system with a series of patterned X-ray beams.

The researchers used a computer to construct a 2D X-ray projection of the object from this series of measurements, which was repeated at different orientations to develop a 3D image.

The team used ‘classical’ ghost imaging — ‘quantum’ and ‘computational’ are the other types — using a silicon crystal to split the beam into two.

However, the silicon crystal they used had a lot of imperfections and, over time and as the temperature changed, the crystal warped, distorting the reflected beam images. Kingston is hoping to try computational ghost imaging in the future, which doesn’t involve the use of crystals.

“Measuring the patterns is where you spend most of your time and X-ray flux because that’s where precision information is required to produce high-quality ghost images,” Kingston said.

“Computational ghost imaging is more easily performed in a lab-based X-ray system, rather than going to a synchrotron.”

Ghost imaging is such a new field that Kingston said researchers are still trying to understand how it works and the best ways to do it.

Among the challenges this creates are that there is not yet a practical way to do it, and getting the images can take a long time, making the process currently unsuitable for medical applications.

Working out how to mathematically carry out the computational side and leveraging pre-existing knowledge of the image can also be difficult.

“We’re still working out the best way to do that in the most efficient and effective ways,” Kingston said.

This article originally appeared as “Seeing ghosts” in the April issue of create magazine.

Could cars and air conditioners harvest fuel from thin air?

Federal election 2019: Engineering on the ballot as Australia heads to the polls

How digital twin technology is changing the engineering landscape

Federal election 2019: Engineering on the ballot as Australia heads to the polls