A new data portal is providing insight into how regulatory changes are influencing building construction.

As federal and state building codes strengthen energy efficiency requirements, a CSIRO portal is providing data on how Australian homes are tracking.

“For the first time, we can see the impact of regulatory changes on how people build buildings,” said Anthony Wright, a research lead in CSIRO’s energy business unit.

Wright’s team maintains a suite of software tools that model the predicted energy demand of residential buildings. This software is used to show that new dwellings meet the energy efficiency requirements of the National Construction Code (NCC).

In May, the NCC introduced new caps on heating and cooling, which will be rolled out over the next 12 months.

“We collect the compliance certificates that are produced by that software, and the data is then shared via the Australian Housing Data (AHD) portal,” Wright told create, adding that the new caps were based on data collected by the CSIRO.

The portal taps into the information collected during the energy efficiency star rating carried out under the Nationwide House Energy Rating Scheme (NatHERS) as part of the process to obtain a building permit for a new house or apartment. This generates a ‘universal certificate’ which includes information about the materials, orientation, size and predicted energy demand of the proposed dwelling.

Wright said that CSIRO had collected more than 600,000 of these certificates, which are used to prove compliance in about 82 per cent of new residential buildings.

“What we can do when we have a lot of these certificates is look at trends in how people are delivering energy efficient residential dwellings,” he said.

It can also provide insights into how the industry is changing designs to meet energy efficiency regulations. For instance, in Tasmania and the ACT, many designs are incorporating a northern orientation, while in Victoria, designers are reducing window size and improving glazing performance.

The AHD has data going back to 2016. As it grows, it could provide engineers working on large infrastructure or government consulting projects with insights into predicted energy demand in new estates, as well as in particular climate zones, states or even postcodes.

CSIRO is also working on integrating predicted energy efficiency data with actual energy consumption data from their National Energy Analytics Research (NEAR) program, which could be valuable for engineers working on grid infrastructure.

Over the past 12 months, the AHD portal has recorded an average energy rating of 6.2 stars for standalone houses across the country, which exceeds the minimum requirement of 6 stars.

For apartments, the average star rating is 6.4, which is better than the required minimum of 5 stars for individual apartments and an average of 6 stars across all units in a building.

According to CSIRO, this is a significant increase on the average of 1.8 stars estimated before the NatHERS scheme was introduced in 2001. CSIRO estimates that this translates to a savings of almost 2.3 tonnes of greenhouse gas emissions per house, and a reduction in the average household energy bills in the order of $560 per year.

Wright said some states and territories, particularly the ACT and Tasmania, are recording even higher star ratings. For example, in the ACT, 5.47 per cent of apartments are rated over 9 stars – meaning their heating and cooling requirements are extremely low.

Wright said these figures have significant implications for future energy efficiency regulations, which have traditionally been based on the assumption that everyone is meeting minimum standards.

“Actually, that’s not true. There’s a fairly large percentage, depending on where you are, that are going well beyond minimum standards,” he said. 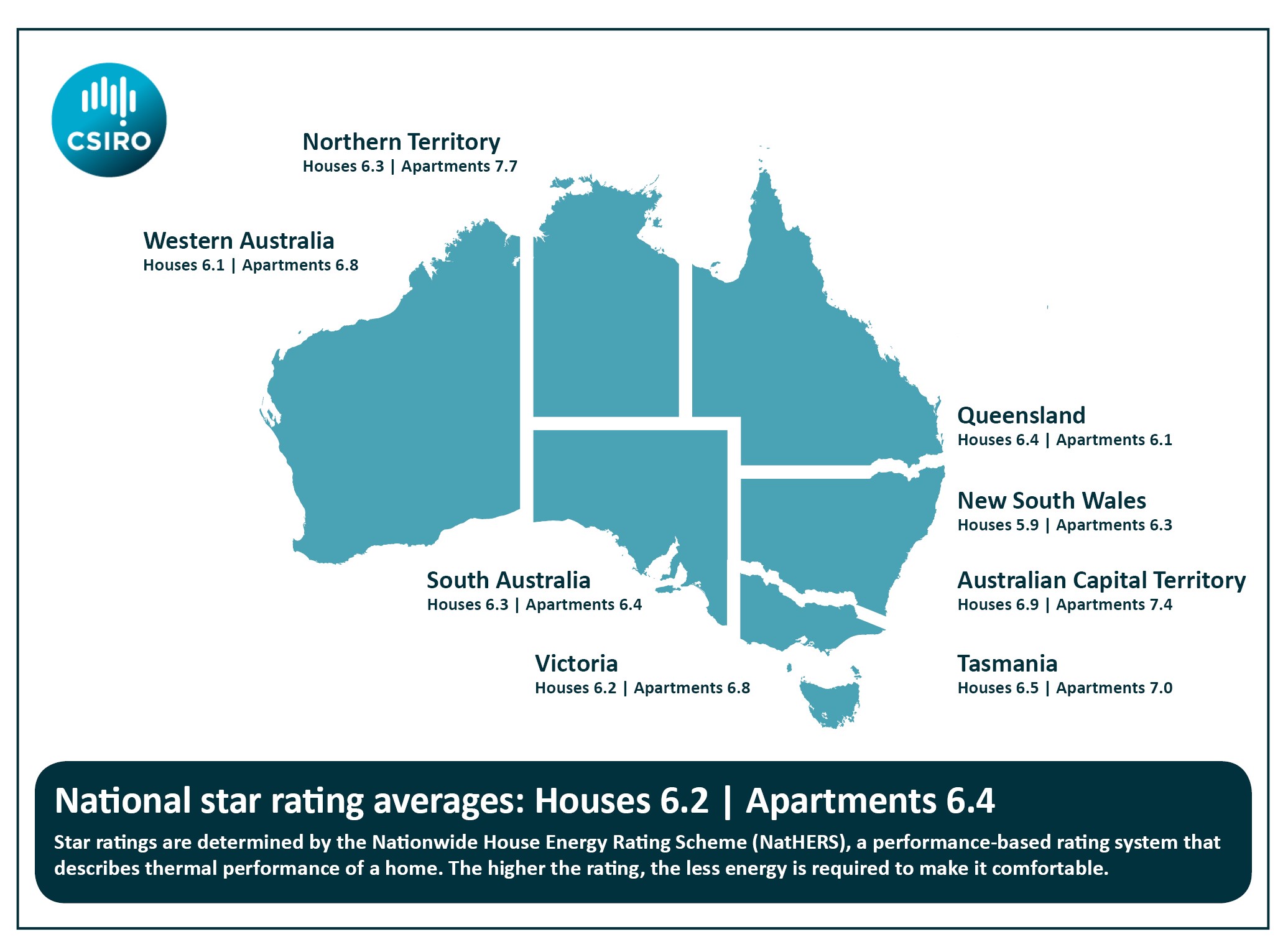 CSIRO’s AHD data is being used to formulate evidence-based regulations. For example, the new heating and cooling caps in the NCC were derived from the AHD dataset.

Wright said the caps were formulated by identifying outliers with particularly poor performance. Using statistical analysis, the Department of Environment and Energy worked out where to “draw a line” to cut off the worst performance without having too great an impact on current building practices.

Wright’s team also supported the Council of Australian Governments (COAG) Building Ministers Forum in their formulation of a Trajectory for Low Energy Buildings, with the aim of working towards zero-energy and zero-carbon ready buildings.

Part of this trajectory is implementing further increases to the energy efficiency requirements in the NCC from 2022.

Wright said AHD data has shown that for new dwellings, the construction industry is “well and truly able to over deliver” on current minimum energy standards. But mechanisms to increase the energy efficiency of the 10 million existing homes are a trickier proposition.

“We need a range of different mechanisms in place to deal with retrofitting, because that’s the really hard task,” he said.

A new type of engine will soon be producing green power

Award-winning renewables engineer says her technology can change the world