Eighty years after its opening, the Story Bridge remains a defining element of the Brisbane cityscape, but it also stands as part of Australia’s engineering heritage.

The interwar years were a momentous time for the growing city of Brisbane. In 1933, the Queensland capital’s population crossed the 300,000 mark for the first time, more than doubling the 143,510 recorded in 1911, just over 20 years previously.

In 1925, 19 local government areas were merged to form a greater City of Brisbane council, necessitating the construction of a new city hall, which opened in 1930. The 1920s also saw the city take responsibility for the growing tram network.

And yet, at the time, Brisbane had just one bridge connecting the city on the north bank of the Brisbane River to its southern suburbs. During the 1920s boom times, it became clear that the city would need to accordingly step up its infrastructure.

And when the Great Depression arrived in 1929, the rapidly growing city found itself with more residents than there was work going. Although the structure of the state’s economy meant Queensland was not immediately hit by the worst of the economic crisis, by 1930, its unemployment rate reached 11 per cent, with 30 per cent out of work in 1931.

Not just another bridge story

“Back in the 1930s, when this thing was first thought about, the challenge at the time really was the river crossings in Brisbane,” said Allan Churchward, a member of Engineers Australia’s National Heritage Committee.

But doing something about the city’s growing traffic problems would have other positive effects.

“In the 1930s — late twenties and the thirties — the Great Depression was on as well, so it was important from the government’s point of view in terms of helping with employment,” Churchward said.

“They came up with a plan of a number of crossings for the Brisbane River and they decided that the Grey Street Bridge was the next priority, which was built and opened in 1932. And then the next one, after that, was the Story Bridge.”

The Story Bridge was to be more ambitious than the Grey Street Bridge, which is known today as the William Jolly Bridge. Connecting Kangaroo Point with Fortitude Valley, it would be built to be six lanes wide — far larger than what was needed at the time — and, when finished, it would claim the title of the longest cantilever bridge in Australia.

And such a preeminent structure would require the oversight of an accordingly preeminent personage.

“Back in the 1930s, when this thing was first thought about, the challenge really was river crossings in Brisbane."
Allan Churchward

In 1932, Bradfield saw the opening of his most famed work as an engineer, the Sydney Harbour Bridge. But although he had made his career in New South Wales, retiring from the state’s Department of Public Works in 1933, Bradfield was a Queenslander by birth.

For the Story Bridge, he came home.

“The Queensland government lured him up here as a consulting engineer in the design of the Story Bridge crossing,” Churchward said.

“He had an offsider down there, James Holt. He came up to Brisbane as well, and he actually was a supervising engineer for the government, supervising the management of the contract. Of which Bradfield was the consulting engineer, looking after the design. Those two had a bit of history together and they must have worked well together.”

The Bradfield-Holt team oversaw the development stage of the project, but other Queensland entities took over when it came time for construction.

“The bridge was designed by Bradfield — it was his design,” Churchward said.

“And then there was a tender process, which was for the construction of the bridge. It wasn’t a design-and-construct, which is a common approach these days.”

The design, which was heavily influenced by an existing bridge in Montreal, the Jacques Cartier Bridge, would be realised by a consortium of two Queensland companies: Evans Deakin and Hornibrook.

“It was basically built all by Queensland resources at the time, which was one of the aims of the employment during the Depression,” said Churchward.

“Hornibrook had just finished the Grey Street bridge in the early 1930s, so it followed on pretty well. That company had a pretty good reputation.”

A number of engineering challenges were involved at the construction stage. The cantilever design was actually a hybrid, with one third at each end expanding from the riverbank and the middle portion suspended between the two. One advantage to this design was that the river could still operate as a port during construction; the two ends of the bridge would not meet until the final stage.

And while at the northern end, the foundations of the bridge could be sunk into a solid rock cliff, on the southern side, workers had to descend 40 m to find ground solid enough to support the structure. This meant a pneumatic caisson technique had to be used.

“That sort of depth, the guys working down there had to work under pressure, so it’s quite a dangerous and hazardous process,” Churchward said.

“They actually had a small hospital beside that pier … For the guys, when they came out of there, they may or may not have the bends because it took them ages to come up, so they could get treated on site if they suffered the bends.”

He points out that not one worker was killed in the foundation work, despite the dangerous conditions, though three did die from falls.

“It was basically built all by Queensland resources, which was one of the aims of the employment during the Depression."
Allan Churchward

A bridge to the 21st century 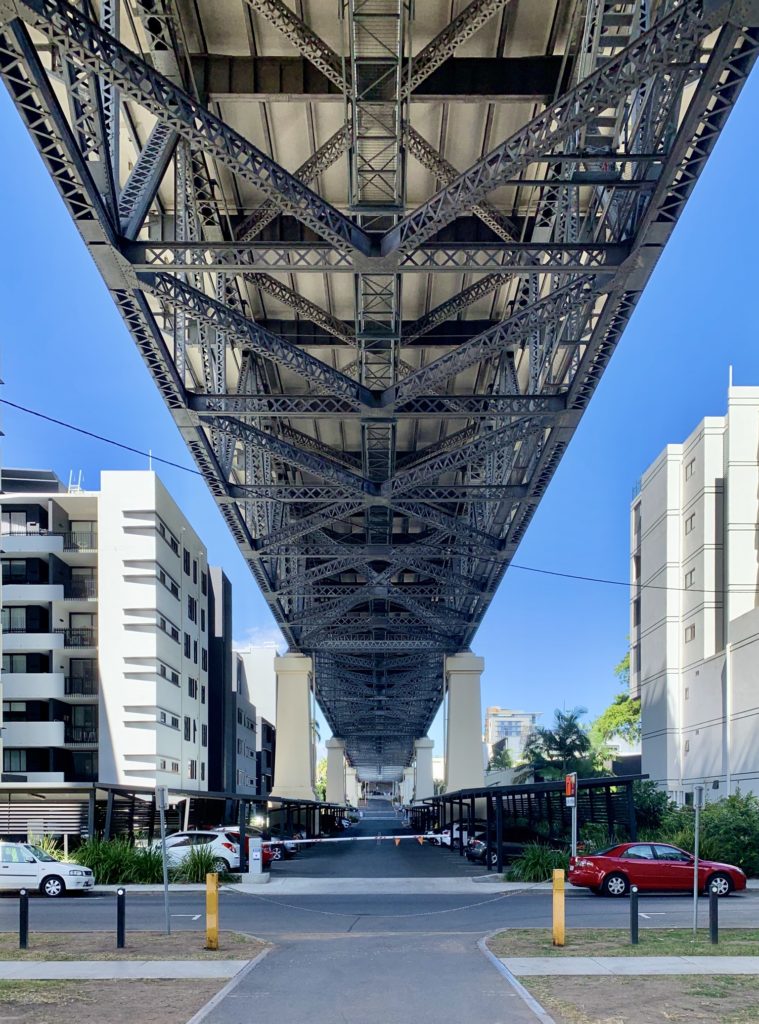 The Story Bridge is one of its time. Churchward points out that today, such a bridge would not be constructed from steel, which requires a lot of maintenance, and that riveted bridges like the Sydney Harbour Bridge and the Story Bridge were not built for much longer.

“In 1947, we built the Burdekin River Bridge up in Central Queensland and it was held together by high tensile bolts,” he explained.

Today, engineers would be more likely to build a concrete bridge, or even a tunnel. But even though the construction of the Story Bridge places it as a creation of the 1930s and 1940s, it was designed for the future.

“It was really built ahead of its time too, because in those days the traffic volumes were pretty small compared to now,” Churchward said.

“They built it to actually cater for six lanes of traffic, and that’s been proved to be a very wise decision. Because now it’s a major carrier of traffic in today’s volumes, and it certainly has paid for itself many times over.”

The bridge was opened on 6 July 1940. Eighty years later, it’s not just a symbol of Brisbane, but a critical part of the city’s infrastructure.

Qantas farewells the Boeing 747, an engineering marvel that ruled the skies