A car produced almost entirely out of biodegradable material is challenging the auto industry to shift its environmental efforts into a higher gear.

Mention flax, or linseed as it’s also known, and you might think of something that New Agers eat for breakfast, or that oil you put on your cricket bat to stop it breaking when you hit the ball.

Student engineers from the Eindhoven University of Technology, in the Netherlands, have come up with another use for flax: they’ve made an electric car out of the stuff.

And it’s not just a gimmick. This car actually works, although it’s not made for the showroom or the driveway.

Rather, it shows car manufacturers around the world that they can do more with renewable materials than they are currently doing.

Biocomposites — natural fibre composites with resins from biological sources — are already being used in the automotive industry for non-structural or semi-structural components, such as linings and mouldings.

“Some companies, like BMW, are doing well,” said Cas Verstappen, one of the Dutch students.

“But we think that they could do better.”

Last year, the students, who call themselves TU/ecomotive, worked with Total Corbion to produce Lina, a car made out of a resin processed from sugar beets and covered with woven flax that was then combined with polypropylene.

For body stiffness and structure, the body panels contained a honeycomb structure placed between two sheets of flax composite. However, the chassis itself was made from aluminium.

This past February, the students unveiled a second prototype, Noah, made from 90 per cent biodegradable materials. This time, they have replaced the matrix of polypropylene with a matrix of polylactic acid. Only the wheels and suspension systems are not made of bio-based materials.

“Lina was bio-based with polypropylene to lay the flax and sugar in,” Verstappen said.

“Noah has no polypropylene. It is stronger, with better moulds, recyclable nuts and bolts. It has no plastic in the chassis and body parts.”

Wouter Winant, Technical Manager at EconCore, who provided Lina and Noah with its honeycombed core, believes there is a lot of potential for these materials to be used to make automobiles in a more ecological way.

He would like to see more focus within the automotive industry on applications that use
60 or 70 per cent biodegradable materials. But he realises also that strict standards and regulations make this difficult at present.

The real problem is that it’s more expensive to produce cars this way.

“It is getting better, though,” Winant said.

“Five years ago, costs were even higher. The development of new materials will bring production costs down.”

According to Dr Garth Pearce, a mechanical and manufacturing engineer from the University of New South Wales, the properties of biocomposites are continuously improving.

“Importantly, they are also becoming more reliable,” he said, explaining that, historically, biocomposite properties suffered because it was very hard to control the growing conditions of the precursor plant stock.

“With more dependable properties, the range of potential applications is continually growing.”

Green from the get-go

However, with many of the new so-called green initiatives, energy saved while driving is used instead in energy-intense production phases.

The TU/ecomotive student team believes that the automotive industry can help reduce its global carbon footprint by using more biocomposites, which take less energy to produce.

But there are problems with this approach — at least in the short term. For instance, is the Noah car safe? Is it strong enough to protect those inside in a crash? Will biodegradable material stand up to ultraviolet rays in the long term?

Verstappen said that biodegradable parts don’t limit the car’s lifespan. People’s perception of safety is a problem, but Noah has passed virtual crash tests and the only real concern is that, without metal in the car, radiation generated while moving might affect the vehicle’s wiring.

There are other barriers to the wide-scale adoption of biocomposites, at least in the
short term. 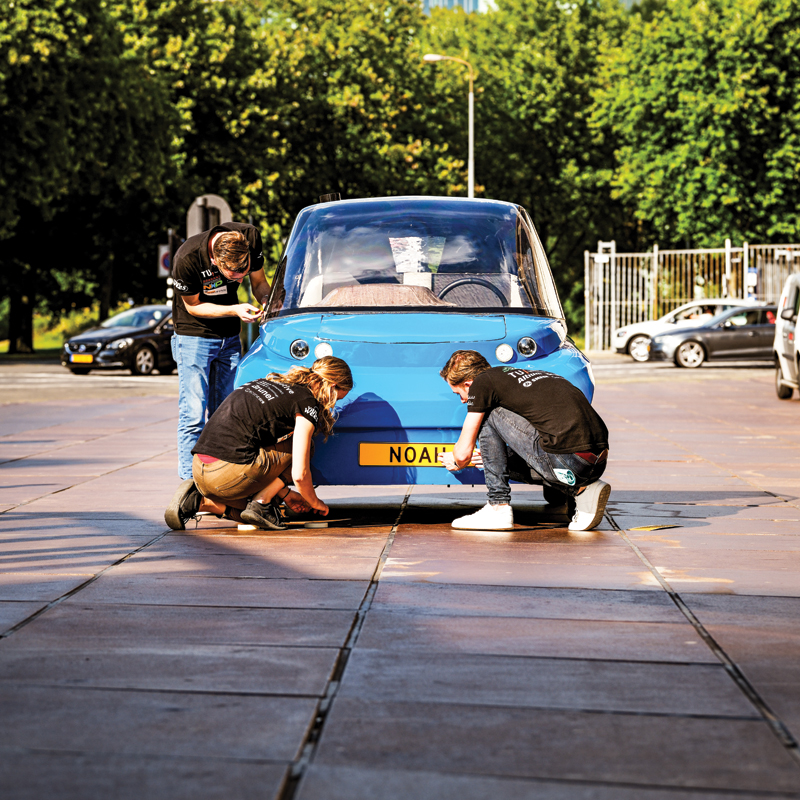 Pearce mentions three: redesign, retooling and retraining. But he also thinks that regulations relating to renewables and recyclables in the automotive industry favour the use of biocomposites in the long term.

“Future adopters of the technology will have lower barriers to entry, thanks to all the effort that the Dutch students have put in,” Pearce said.

“To get something on the road they have certainly had to investigate — and most likely improve — design tools, manufacturing processes, scalability, supply chains and maintenance procedures,” he said.

“We can only do so much, with our knowledge, expertise and resources,” Verstappen added.

“But if we can do this much, think what the big car companies can achieve with all of their resources, knowledge, expertise and finance.”

This article originally appeared as “Green ride” in the December 2018 issue of create magazine.

This company takes American trucks and turns them into Aussie utes