The first woman to graduate from the University of Melbourne with an engineering degree is still inspiring students today.

When young engineering student Diane Lemaire applied to live at the University of Melbourne residence Janet Clarke Hall in the early 1940s, she was obliged to complete a ‘housewifery’ test for entry.

This required proving her prowess with a mop and a broom as well as her talents in the kitchen. However, as her assessors were soon to discover, Lemaire couldn’t even boil an egg. Her ambitions went well beyond a life of domesticity.

Despite failing her housewifery test, Lemaire went on to live at Janet Clarke Hall until completing her degree in mechanical engineering in 1944. She was the first woman to graduate with an engineering degree from the University of Melbourne and went on to a successful career as an aeronautical engineer.

Today, her generous bequest to her alma mater aims to foster opportunities for other female engineering students via the Diane Lemaire Scholarship.

The University of Melbourne was founded in 1853, however it would take 28 years for women to become part of the student body and another 63 years for a woman to graduate from its School of Engineering.

Lemaire’s time at the university was influenced by the conflict of World War II. In fact, the engineering faculty played a significant role in the war effort. Its new two-storey workshop, which had been built shortly before the war began, became an annex of the Department of Munitions, and one of Lemaire’s teachers, Professor Aubrey Burstall, developed a successful gas producer to keep cars on the roads without need of petrol.

Although she was the first female engineering graduate of the university, Lemaire always felt equal to her male peers. She loved being in the workshop with the smell of grease and oil and it was the only time she’d dream of wearing trousers.

Records provided by her nephew, Michael Lemaire, show that the only thing she felt she couldn’t do was crank a heavy machine.

“It seems that being a female engineering student did not impose any significant difficulties on her,” Michael Lemaire said.

“Perhaps the shift of gender roles during the war affected this.”

With the male workforce considerably depleted during war, women took on a significant role in maintaining wartime production. In Melbourne, women were trained at factories at Fishermans Bend, home to several prominent historical Australian aircraft design and manufacturing companies, and worked alongside men in the assembly of fighter planes.

Lemaire’s university holidays were spent at Fisherman’s Bend working at General Motors and in a factory that produced armoured fighting vehicles.

While some women retained their positions at engineering factories at Fishermans Bend during the post-war period, most were not kept on after the male workforce was restored. By 1947, the overall proportion of women in the workforce in Australia had returned to its 1939 rate of just over 23 per cent.

Much of Lemaire’s career, however, remained at Fisherman’s Bend. After graduating in 1944, she was employed as a technical officer working in experimental stress analysis at the Council for Scientific and Industrial Research Division of Aeronautics, which later became the Aeronautical Research Laboratories.

In the early 1950s, Lemaire left Fisherman’s Bend for the United Kingdom to work at the Royal Aircraft Establishment in Farnborough. Within a decade, she had been awarded the prestigious Amelia Earhart Fellowship, which was established in 1938 by Zonta International to honour the legendary female pilot and to assist the future of women in the fields of aerospace-related sciences or engineering. 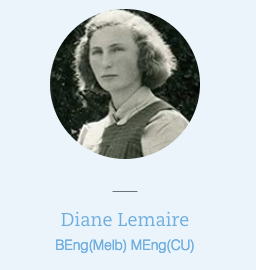 During her first year of tertiary study, Lemaire had to pick up physics and chemistry from scratch. By the early 1960s, she was enrolled in a Master of Science at Cornell University in the United States. Her thesis topic was On the Question of the Existence of a Homogeneous Solution to the Equation for the Flow over the Shroud of a Ducted Propeller.

According to records from her nephew, Lemaire did not choose the thesis topic. In fact, she might not have taken it on at all had her professor not offered to pay her. As tuition was expensive, she took up the challenge.

When Lemaire returned to Melbourne, she resumed work at Aeronautical Research Laboratories and was the Officer-in-Charge of the Aerodynamic Research Group until her retirement in 1986.

Lemaire passed away on 27 October 2012 and left a bequest of one-fifth of her residuary estate to the University of Melbourne’s Faculty of Engineering. The funds have endowed the Diane Lemaire Scholarship, which is open to female PhD students who have completed the equivalent of at least six months candidature.

Trang Ngoc Cao, a PhD student in the University of Melbourne’s Department of Electrical and Electronic Engineering, is a recent beneficiary of the Diane Lemaire Scholarship.

Her thesis, Designing a Nanoscale Molecular Communication System, combines her love of nature with communication systems. Trang knew little of Diane Lemaire before applying for the scholarship, but she describes her as an “inspiring engineer”.

“I’d also like to be able to help other female engineering students one day and give them opportunities just like the one Diane Lemaire has given me,” she said.

“We have many high-profile alumni who have shaped the way engineers operate today,” added Professor Mark Cassidy, Dean of the School of Engineering at the University of Melbourne.

“Diane Lemaire is one of these, and proudly our first female graduate who paved the way forward for women through her stellar career.”

This article originally appeared as “First class” in the March 2019 issue or create magazine.

10 of Australia’s most influential women in engineering

The COVID-19 pandemic has changed how engineering students learn

10 of Australia’s most influential women in engineering