The SSR-Omni was developed in response to major catastrophic tailings dam collapses in recent years.

The SSR-Omni, which recently received an Australian Engineering Excellence Award, was designed, developed and manufactured in Brisbane by GroundProbe, a mining and civil industries technology company that grew out of an industry-funded PhD project at the University of Queensland.

It began in 1997, when the Australian Coal Association Research Program provided funding to the university to focus on real-world applications for its radar technology, which could detect slope failures without require physical access to slope walls, and provided real-time monitoring in a broad range of conditions, GroundProbe’s Head of Product Development Fernanda Carrea MIEAust told create.

“It is extremely humbling for a technology which started off as a PhD project made in Queensland to now be solving high-value problems like tailings dam collapses; saving millions of dollars in potentially lost productivity and, more importantly, saving hundreds of lives around the world,” Carrea said.

The team developed the technology in response to major catastrophic tailings dam collapses in recent years, situations Carrea said could have been prevented.

“The Vale Feijão tailings dam collapse in 2019 [in Brazil] showed the devastating impact of these disasters,” she said.

“Hundreds of people lost their lives, and the devastation cost untold billions of dollars in environmental, economic and social impact.

“Likewise, fatalities occur every year in open-cut mine collapses… We felt compelled to provide a solution that could warn of upcoming tailings dams failures, to ensure both mine site workers and people in surrounding communities could be safely evacuated ahead of time.”

“It is humbling for a technology that started off as a PhD project made in Queensland to now be solving high-value problems."
Fernanda Carrea MIEAust

How does it work?

The SSR-Omni is a real-time monitoring and alarm system, designed to detect hotspots of movement in tailings dams and open-cut mine sites.

The device takes 37 million measurements across a 11.2-kilometre diameter, over a period of 40 seconds. This 360-degree scan shows movement of rock and ground with 0.1 millimetre precision, allowing sub-millimetre slope movements to be detected from a distance of up to 5.6 km.

“It has been designed to detect hotspots of movement in an ultra-fast, all-encompassing scan allowing it to cover the broadest of areas with the highest resolution,” Carrea said.

So far, the device has been deployed on mine sites across the globe, including in Australia, as well as Chile, the United States (US) and Mexico, generating seven-digit export revenue figures for Australia.

“The system has successfully detected a propagating collapse in an open-pit mine wall in the US, as well as successfully predicted the time of collapse of another open pit-mine slope in Australia,” Carrea said.

“It is actively driving safety and productivity in open-cut mines and tailings dams around the world.” 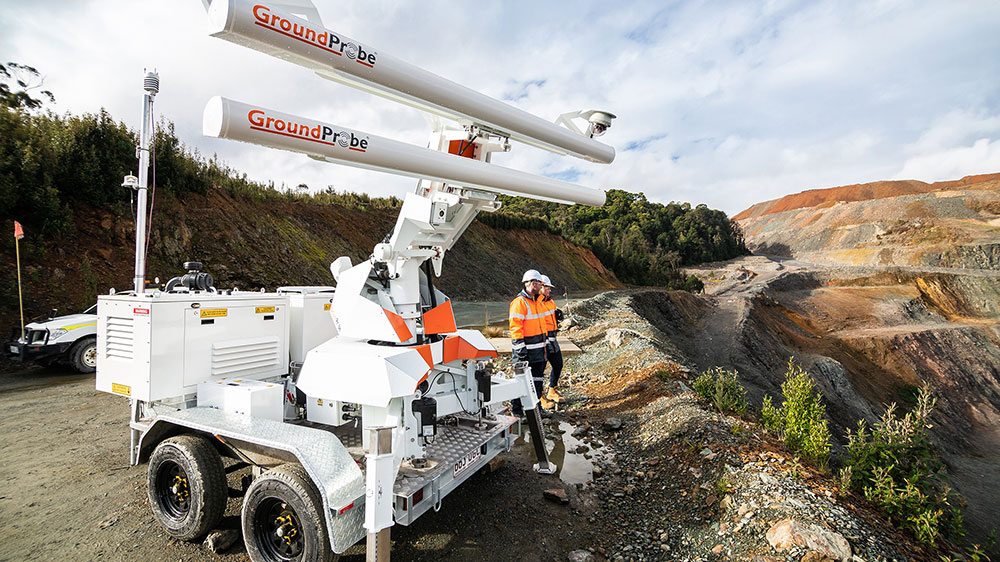 The SSR-Omni may be successful now, but developing the technology wasn’t without its challenges.

“The first time we took the system off-road in four-wheel driving conditions in a mine site environment, we literally shook our precious four lens, 40-megapixel camera to pieces,” Carrea said.

“This led to four prototype designs to absorb six axis-shock and vibration. We partnered with a testing house that has a huge vibration table and proceeded to quickly iterate designs that would keep the camera stable as it shook. We put these through extreme vibration testing, smashed a few and ended up with the final design.”

Modifying the existing radar designs to suit the extra mass and size of the larger transmitter and receiver antennas was a further challenge for the team.

“The transmitter and antennas enable the radar to continuously rotate 360 degrees in each direction,” Carrea said.

“To prevent overshoot and overwinding of the cables, we incorporated a simple, robust mechanical solution into the central control mechanism… [Another] example of interesting engineering ingenuity is the power supply, which operates autonomously and can run continuously provided the diesel is topped up.

“The system has successfully detected a propagating collapse in an open-pit mine wall in the US."
Fernanda Carrea MIEAust

“The state of charge for the station batteries is monitored and once it falls below a certain threshold, the diesel generator is automatically started and recharges the batteries. This enables the radar to monitor critical slopes 24/7.”

Carrea described the final product as the result of a ‘huge team effort.’

“[It] involved every single person in the business; everyone had a contribution, no matter how big or small,” she said.

“Winning the top engineering award in Queensland has been an absolute honour for all of us that make GroundProbe.”

As one of the finalists for the 2020 Sir William Hudson Award, the SSR-Omni will now go up against interstate competitors, with the winner announced at the Pinnacles Awards Ceremony on Monday 9 November.

Manufacturing the future together

Charlotte Barkla is a former civil engineer, who is also a published author and freelance writer. She likes to learn new things, which makes writing for create the perfect job.

‘That’s when I got the idea a powerful water gun would be fun’: Meet the engineer behind the Super Soaker