The recently launched NovaSAR-1 satellite has the ability to provide high-resolution Earth imagery for disaster assessment or crop monitoring even at night or in cloudy conditions. And Australia will have direct control of the data collected.

Although Australia is a major consumer of satellite data – for applications such as weather forecasts, bushfire management, infrastructure and environmental monitoring, agriculture and mining – this information comes from hardware owned by other nations or private companies.

That changed with the launch of the NovaSAR-1 satellite earlier this month. CSIRO has invested $10.45 million in a 10 per cent share of data acquisition and tasking time over the next seven years. The UK Space Agency and Indian Space Research Organisation (ISRO) are also data share partners.

“This is the first time we’ve had direct control over satellite tasking and data acquisition for Earth observation purposes – we can decide exactly where and when to collect data to best meet our national needs, and download it to Australian receiving stations for our use in near real-time,” explained Dr Kimberley Clayfield from the CSIRO Centre for Earth Observation.

One example of the benefits of this new capability is rapid spatial mapping of local and regional natural disasters such as bushfires, cyclones, earthquakes and floods, which could save between $0.7 million to $1.4 million per event.

NovaSAR-1 has passed initial system checks following its successful launch from the Satish Dhawan Space Centre in India, and the CSIRO Centre for Earth Observation expects to start accepting imaging requests in December.

Cloudy weather has been an obstacle for Earth imaging satellites in the past. NovaSAR-1 solves this issue with its S-band synthetic aperture radar (SAR), which bounces 2 to 4 GHz microwave pulses off the Earth’s surface to form images.

Clayfield, who is also a past Chair of Engineers Australia’s National Committee on Space Engineering, said the key advantage of NovaSAR’s SAR imager is it enables imaging both day and night, and in all weather conditions. She added the satellite has a revisit rate of 14 days.

“Some applications of the data could include being able to carry out disaster impact assessment following a cyclone or storm, when there’s still lots of cloud cover that would make optical imagery difficult; and collection of time series data for regular monitoring of variables like crop growth or land use change, particularly in tropical regions where regular cloud cover is an issue,” Clayfield said.

Control of which data is collected from NovaSAR-1 is a big step up, and Clayfield said CSIRO is currently building its own Earth observation cubesat.

“We are going to export that technology, and hopefully make that a global standard,” Clark said.

To the Moon and beyond 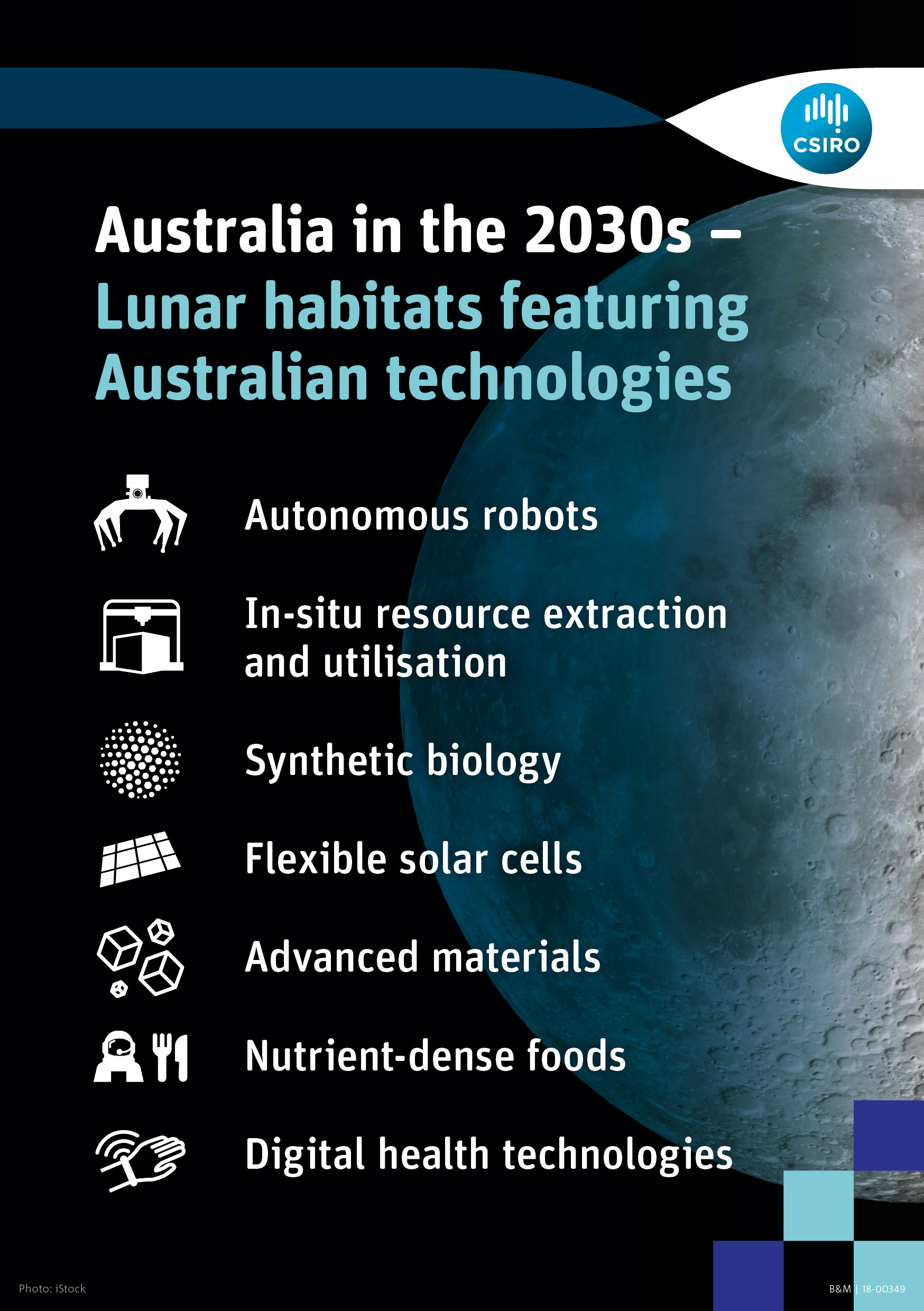 “This roadmap introduces some key scientific opportunities that Australia can utilise to drive engagement and growth across the space value chain,” Clark said.

CSIRO Chief Executive Larry Marshall said the existing space industry is built on a foundation of trust earned 50 years ago when we enabled the world to see mankind touch the Moon.

“That kind of inspiration is a key ingredient in supercharging growth in new industries, new jobs, new STEM talent and developing a dynamic nation where the sky is no longer the limit,” he said.